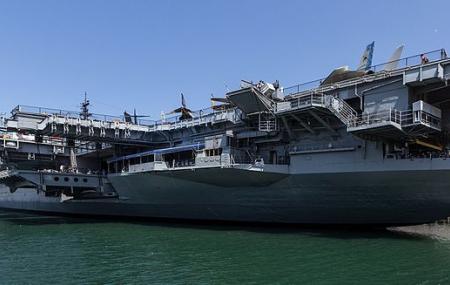 USS Midway Museum San Diego opened to public on 7 June 2004 and is today the most popular naval warship museum in the United States. A family friendly attraction in San Diego, this museum offers a range of interactive exhibits, a self-guided audio tour, and numerous restored aircraft for its visitors to explore.

Midway has over 60 exhibits and 29 restored aircraft for you to explore.

Exhibits at Midway include -

The museum features more than 30 restored jet planes, propeller aircraft, and helicopters. A few of these include:

Activities at Midway include -

Special military events and ceremonies can be attended on the Midway. You can also book the venue to host your own event.

Your museum ticket includes a self-guided audio tour which can be completed over the span of 2 to 4 hours. These tours are split in three sections - Flight Deck, Hanger Deck, and Below Deck. These tours are available in English, Spanish, Japanese, Chinese, German, and French.

Midway offers an array of education programs for schools with its onboard in state-of-the-art education facilities, overnight adventure where you can spend a night on the longest-serving aircraft carrier in Naval history, youth programs like Boy Scouts of America (BSA) and Girl Scouts of America (GSA)

The museum’s Fantail Café is located on the Hangar Deck and offers snacks, sandwiches, and Starbucks coffee.

Enjoy a private Docent-led tour to ship like never before. Led by Midway volunteers, these tours can be altered as per your time and convenience. Also enjoy “Voices of Midway” film at the end of the tour. Taking a USS Midway Museum tour is highly recommended.

How to Reach Uss Midway Museum

Love this? Explore the entire list of places to visit in San Diego before you plan your trip.

Fancy a good night's sleep after a tiring day? Check out where to stay in San Diego and book an accommodation of your choice.

67.24% of people prefer to travel by car while visiting Uss Midway Museum