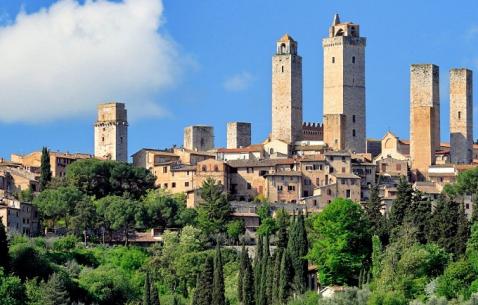 San Gimignano, Italy is a walled medieval city located in the province of Siena, Tuscany. Known for its hilltop setting and an unforgettable skyline, this old city is a home for around 7,768 people.

Originally an Estrucan village in the 3rd century BC, this city is now spread over 138 sq.km enclosed with thirteenth century walls that can be entered through two streets. The fourteen (out of 72) remaining towers rise up to the sky to create an enthralling view looking like medieval Manhattan.

After the Estrucans, Romans acquired the place, naming it Silvia. Later, it was named San Gimignano, after the Bishop of Modena. In 1199, the city became a commune and prospered well. However, Black Death Plague swept off half the city in 1348. The town was preserved in its medieval grandeur till the 19th century and gained the attraction of the tourists.

Popular as the ‘town of fine towers’, San Gimignano, Italiais known for its impeccable Romanesque secular and domestic architecture. The construction of the city serves as an example to this. The beauty of this town is so riveting that UNESCO enlisted the whole city as a World Heritage Site. Do visit this city while on your vacation to Italy.

Essential travel information and San Gimignano tips for your visit

Plan Your Trip To San Gimignano

The best tours and activities in the city, guided by experts to give you a local insight to the best of San Gimignano