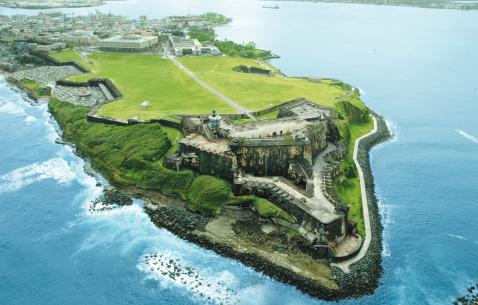 San Juan is the capital of Puerto Rico and its most important sea port. It was founded by Spanish colonists in 1521 and used to be called ‘Ciudad de Puerto Rico’ which translated to rich port city. Living up to its name, San Juan is Puerto Rico’s financial, cultural and tourism hub. The most striking feature of the city are its myriad fortifications which were built to protect the booming city and the huge role it played in the transportations of goods from the New World to Europe. Owing to its importance, the city has witnessed attacks by the British, the Dutch and the Americans.

The oldest part of the city is called Old San Juan. Clever, right? Well, the region makes up for the lack of ingenuity in its name with its sheer beauty and magnificence. It’s one of the most important tourist destinations in the area because it is steeped in history and the architecture is breath taking. After all, colonial buildings are picturesque and who doesn’t want a bit of antiquity in their holidays?

Being a sea port of such vast importance, the city has witnessed a number of cultural exchanges over the centuries and thus, has become one mixed bag of a city. This can especially be seen in its cuisine. Because a little bit of this and a little dash of that makes a whole lot of yum. Travel with family, or go solo; San Juan will not disappoint.

I think this city should be marked as a priority in your vacation planner. Besides all of the above, it’s where Ricky Martin came from. I mean, come on. He was the genius behind shake your bon-bon. Let San Juan inspire you like it inspired Martin. Sort out your itineraries. Live La Vida Loca!

Essential travel information and San Juan tips for your visit

Plan Your Trip To San Juan

The best tours and activities in the city, guided by experts to give you a local insight to the best of San Juan