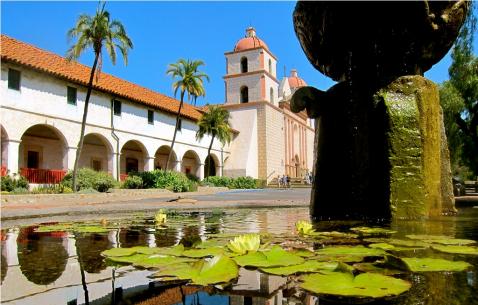 California’s most historic and picturesque towns and the Santa Barbara tourism will welcome you with characteristic sunny warmth upon your visit, its south-facing coastline lending it that ‘banana belt’ climate with architecture that is notably California Mission in style.

An interesting bit of local trivia – Santa Barbara was the film capital of the world in the 1900’s, a hotspot for legendary stars such as Douglas Fairbanks, Mary Pickford and Charlie Chaplin during a 10-year crest during which 1,200 movies were made here. Today, a trip to Santa Barbara is a perfect vacation for families, couples, individuals alike and those who enjoy shopping, water sports, fine dining, hiking or just spending some time at the beach will always find a place in Santa Barbara. This beautiful city really does know how to span the spectrum when it comes to recreation, and due to its weather it is often referred to as the ‘American Riviera’.

It is starkly different from its hyper-metro neighbouring city Los Angeles with a milder climate and lush environment, without compromising on facilities and amenities. Its wide beaches, highly rated wineries, and a large variety of shopping and dining choices make it possible for a town of just 90,000 residents to enjoy the sort of cultural and social exposure that generally only citizens of much larger metros are privy to.

Although celebrities often holiday around Santa Barbara, it is hardly a playground for the rich and famous with the average income barely higher than that of the rest of the state.

The Santa Barbara visitor’s guide is home to the legendary Stearns Wharf, a site of great historical significance and there are several museums for visitors’ perusal dedicated to art, natural history and maritime exhibits. The Santa Barbara County Beach Park is legendary with its sheer range of recreational priorities including swimming, pedal boating, surf fishing, cycling and golf.

Behind the city of Santa Barbara and beyond the Santa Ynez Mountains, is the Los Padres National Forest, containing within its premises several remote wilderness areas.

The best tours and activities in the city, guided by experts to give you a local insight to the best of Santa Barbara