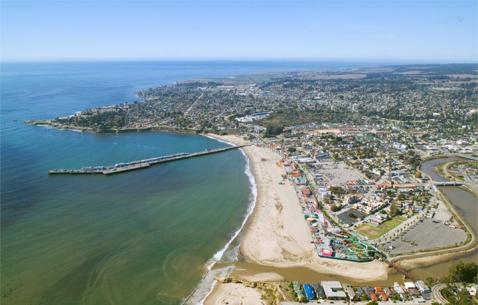 Santa Cruz is a county seat and the largest city of the Santa Cruz county in California. Located on the northern edge of the Monterey bay, Santa Cruz is a beach resort destination that experiences a Mediterranean climate, meaning the climate is pleasant throughout the year and that the city can be visited at all times of the year. Offering some of the best oceanic views, Santa Cruz has a laidback setting to it with shades of vibrancy. Although highly influenced by the Silicon valley, Santa Cruz offers an ideal escapade for the city dwellers of San Jose and San Francisco. The countercultural system of living is what that inspires this coastal town and keeps it moving.

Adorned by several beaches and parks, Santa Cruz is a treat for surfing enthusiasts. Go surfing on the wave breaks against the backdrop of the beautiful imagery of the Sun kissing the coastline, relax on the shores of the beach while sipping on glasses of cocktails, and relish the taste of exotically cooked seafood.

From beautiful coastlines to redwoods to historic museums, Santa Cruz has plenty of different attractions that you should visit. Some of the must visit places and things to do in Santa Cruz include enjoying in the amusement park of Santa Cruz Beach Boardwalk, taking an interesting trip to the Mystery Spot, relaxing at the Natural Bridges State Beach, and hiking the Wilder Ranch State Park.

Pick up contemporary women's clothes and accessories at the Pacific Trading Co, stock your shopping bag with custom bottles of vinegar and olive oils from the True Olive Connection, treat your sweet tooth to the best of delicacies from Nut Kreations, and shop for holiday souvenirs at Stripe.

The coastal city of Santa Cruz is a popular tourist destination for those visiting California. It is full of beaches on its western end which is contrasted by the redwood forests on its eastern side. Santa Cruz began as a Spanish settlement and today is one of the best beach towns in California. The beaches are the main attraction in Santa Cruz. Depending upon the weather, you can surf, sail, swim, kayak or paddle in the waters here. The Beach Boardwalk is an amusement park that has one of the oldest wooden rollercoasters in history. There is a surfing museum here where you can learn about the history of surfing in California. The Natural Bridges State Beach has plenty of nature trails where you can see the monarch butterfly migrations. Head to the Santa Cruz Wharf for watching sea animals and fishing activities. Cultural events like the Santa Cruz Blues Festival and Salsa By The Sea also take place here. Travel to Santa Cruz for a vacation full of fun and adventure.

Essential travel information and Santa Cruz tips for your visit

Plan Your Trip To Santa Cruz

The best tours and activities in the city, guided by experts to give you a local insight to the best of Santa Cruz