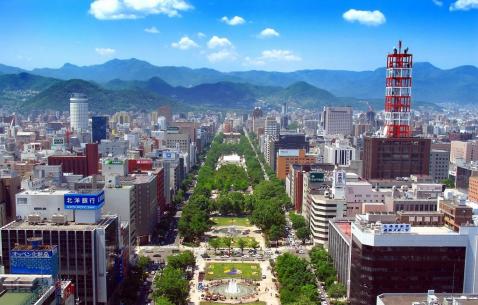 You can find a myriad of malls, shopping complexes and entertainment here but the city’s heart lies in its mountains, its local cuisine (the city is the origin of ‘miso ramen’), its rich culture and art which still form its backbone. Many artists’ work including Lucio Fontana, Lee Ufan and Nishho Kanda are housed in the city’s museums and are a must-visit for art lovers.

However, Sapporo truly shines on the world map for hosting Winter Olympics in Asia for the first time in 1972 and 3 games of the 2002 FIFA world cup!

Originally many indigenous tribes lived in this area, then called ‘Ishkari Plain’. In the early 19th century the city earned its own identity. Soon with America’s assistance, the whole region was developed to form the present day Sapporo city.

The city is etched in war history and was severely affected by the Second Sino Japanese War and the World War II. However, post the troubled times the city got its iconic Sapporo Dome where the 2002 FIFA world cup was hosted.

The highlight of the whole city can be summed up in 3 words: Sapporo Snow Festival which welcomes countless number of people form all over the world to the city. The larger than life ice sculptures which are lit up during the festival are the main tourism boosters of Sapporo. The winter season is known for its super cold temperatures and you can find ice sculptures spread around the whole region.

Sapporo promises to offer a whole different dimension of Japan to all its visitors! And if you look close you will see its history merge seamlessly with its stunning urban life. Read on to know what your travel guide will not tell you about Sapporo.

Essential travel information and Sapporo-shi tips for your visit

Plan Your Trip To Sapporo-shi

The best tours and activities in the city, guided by experts to give you a local insight to the best of Sapporo-shi