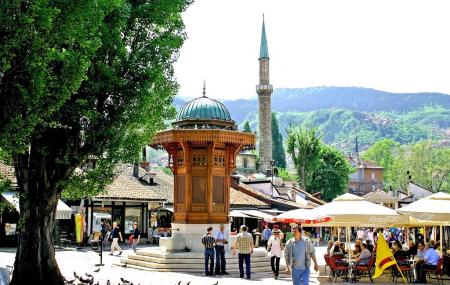 The Orient, Persia and Europe couldn’t have mixed better than this. This 16th century bazaar was once twice its current formidable size; a fire in the 19th century burned half of it down. It’s surrounded on all sides by magnificent Islamic architecture. He had a bridge built across the Miljacka so a new economic centre could be built – this was followed up with the building of the region’s most famous mosque, a number of libraries, madrassa, Hanniqa. A number of commercial  properties were developed too, which included caravanserais (large courtyard-type dwellings where travellers could put up for the night). This historical gem was nearly destroyed in 1945, under the belief that such a place could contribute nothing more to the city. It’s a good thing it wasn’t – today, the place is the heart and soul of Sarajevo, a lovely collection of restaurants and shops (all good eating and shopping). The place brims with history and life, and the people watching is unlike anywhere else in Europe.

The market is set in Stadi Grad, which itself is the most historically portion of the city. So if you happen to wander of into one the crooked little roads of this place, don’t worry; there’s still plenty to see. When you’re here, check out the Sarajevo Spite House. It’s got a fun story behind the curious name.

Another thing to check out in the square is the Sebilj, also known as the pigeon square for all the birds that frequent it.

Love this? Explore the entire list of places to visit in Sarajevo before you plan your trip.

Fancy a good night's sleep after a tiring day? Check out where to stay in Sarajevo and book an accommodation of your choice.

57.26% of people prefer walking in order to reach Bascarsija

People normally club together Ago and Yellow Fortress while planning their visit to Bascarsija.