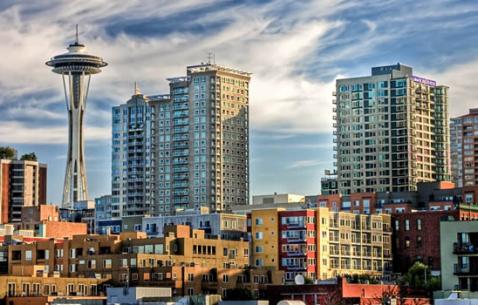 Seattle is one of the largest cities of Washington and boasts a picturesque backdrop of the lush Pacific Northwest. The charming city has a vibrant history that dates back to 4000 years when the area was inhabited by Native American tribes. The history of Seattle can be divided into events that had a significant impact on the city like the great fire of 1889, a frenzied gold rush of 1897, the World’s Fair of 1962, the formation of an airplane company called Boeing in 1917, and the emergence of a game-changing computer company, Microsoft in 1975. Today, Seattle is home to diverse neighbourhoods and boasts some of the country's best coffee, a thriving arts scene, cultural and historical attractions, exciting outdoor activities, myriad hills, Luxury hotels, high-end restaurants, art galleries, museums, markets, green spaces, stunning views of the mountain ranges and the Pacific Ocean, and a plethora of events and festivals that have turned this city into one of the most sought after travel destinations in the world. One can even indulge in relaxing activities like boating as well as thrilling attractions like outdoor activities and adventure sports. Search for the available Seattle tours for all existing attractions and activities. The great natural splendour of Seattle when combined with the grey, misty rainy days, adds to the iconic rustic ambience of Seattle. As one takes a stroll down the neighbourhoods of Seattle, one can come across various treasures like bookstores, cafes and buskers that preserve the former image of the city. Seattle is an urban city surrounded by unmatched beauty, that lures travellers to an unseen adventure that awaits them. Each one of you should visit Seattle at least once and experience all that it has to offer considering the best time to visit Seattle.

Essential travel information and Seattle tips for your visit

Plan Your Trip To Seattle

The best tours and activities in the city, guided by experts to give you a local insight to the best of Seattle