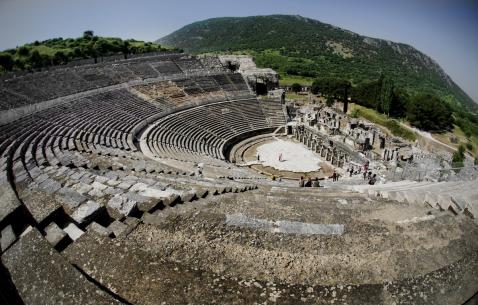 Situated just beneath the ancient Fortress of Ayasuluk, Selcuk was often considered as a Turkish farming village. However, the city has lot to offer in its palate. Step into the city and you will be taken to a historical journey of spanning two thousand years. The ancient city of Ephesus, being the primary tourist attraction of Selcuk has managed to attract nearly thousands of tourists from all over the world. A tour within this ancient city will let you experience the lifestyle that used to exist in the glorious days of Rome and Greece, in those ancient days. The list doesn’t end here. Selcuk is also said to house the oldest mosque of western Turkey, named Isa Bey Camii. Not to be missed out from the list of tourist attractions in Selcuk are the ruins of the Basilica of St. John, remains of Temple of Art (one of the Seven Wonders of the World) and the Ayasuluk Fortress itself.

Visiting Selcuk during peak months might make the city look crowded but you might end up getting good deals for guided tours around the city. However, the best way to explore the city is on foot.

Still the city’s down-to-earth nature, mixture of traditional country attitude and hospitality by the locals has always been successful in attracting visitors throughout the year.

Essential travel information and Selcuk tips for your visit

Plan Your Trip To selcuk

The best tours and activities in the city, guided by experts to give you a local insight to the best of Selcuk