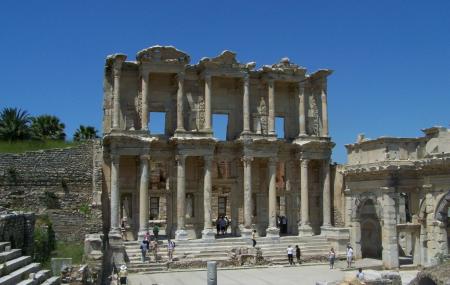 Located within Ephesus, it is one of the most ancient and beautifully structured libraries in the history of world. Build in 117 AD, the magnificent library was a monumental tomb of Gaius Julius, Celsus Polemaenus. He was the governor of the province of Asia. At the entrance, you will see a statue of Athena, as Athena was considered as the goddess of wisdom.

Inside the library, there were nearly 12,000 scrolls of manuscript, preserved in the cupboards in niche on the walls in order to protect them from getting damaged by the outside heat. That’s why, this library was declared as the third richest library after the Alexandra and Pergamum. The library has three entrances and its façade has tow-stories, with Cointhian styled columns, based on the ground floor. There are three windows in the upper story. An overall view of the library will tell you that the columns were built in such a way so as to create an optical trick where the middle column would look bigger in size than the ones located on the sides of facade. This structure gave the library a wider look.

How to Reach Library Of Celsus

Love this? Explore the entire list of places to visit in Selcuk before you plan your trip.

Fancy a good night's sleep after a tiring day? Check out where to stay in Selcuk and book an accommodation of your choice.

70.25% of people prefer to travel by car while visiting Library Of Celsus

People normally club together Great Theatre and Ancient City Of Ephesus while planning their visit to Library Of Celsus.