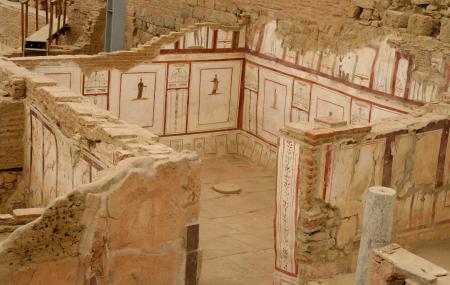 Located on the hills, opposite to the Hadrian Temple is the famous Terrace Houses of Ephesus. Also known as the Houses of the rich, displays the royal lifestyle followed during the Roman period. It was built according to Hippodamian plan of the city where every street transects at every angle. The houses had six residential units built on three terraces at the edge of the slope of Bulbul Mountain. One of the units is said to belong to 1C B.C. and has been in use till 7C A.D.

Crane your neck to see the protective roofing that looks similar to the Roman houses. The striking feature of these houses is its mosaic floor and the frescos. At present, two of the houses have been opened for public visit.

Another striking feature to look forward is the heating system of these houses. Clay pipes were used to be constructed under the floor and behind the walls, through which hot air was passed during winter and cold water during summer.

How to Reach The Terrace Houses

Love this? Explore the entire list of places to visit in Selcuk before you plan your trip.

Fancy a good night's sleep after a tiring day? Check out where to stay in Selcuk and book an accommodation of your choice.

91.92% of people prefer to travel by car while visiting The Terrace Houses

People normally club together Library Of Celsus and Ladies Beach while planning their visit to The Terrace Houses.