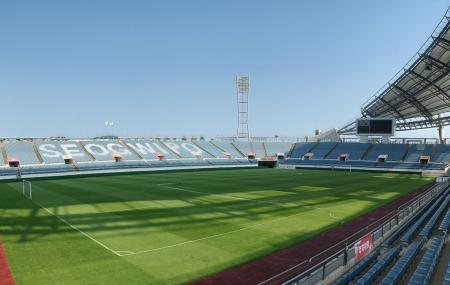 Jeju World Cup Stadium is a large, prominent football stadium in Jeju, South Korea. The huge stadium holds a capacity of 35,657 people. While its construction started in the year 1999, it was opened to the public in 2001. The stadium is shaped like the mouth of a volcano and its roof looks like the nets of Jeju’s traditional fishing boats. The large green field has hosted some prominent games that include the FIFA World Cup 2002 matches. Since the stadium is located near the sea, it is frequented by tourists. The stadium also has a jogging track which is used by the locals for a morning or evening walk. You can make a quick stop at this stadium while wandering in Jeju, South Korea.

Try the best Seogwipo-si trip planner to visit this Jeju World Cup Stadium as well as many others.

You won't miss your home when in Seogwipo-si, hotels in Seogwipo-si like Hotel Tong Jeju, Sun Beach Hotel and Ocean Palace Hotel offer some of the best places to stay in the city.

Create your own Seogwipo-si vacation packages or choose from the ones made by travel experts. Also explore the best ways for how to reach Seogwipo-si.

Love this? Explore the entire list of places to visit in Seogwipo-si before you plan your trip.

Fancy a good night's sleep after a tiring day? Check out where to stay in Seogwipo-si and book an accommodation of your choice.