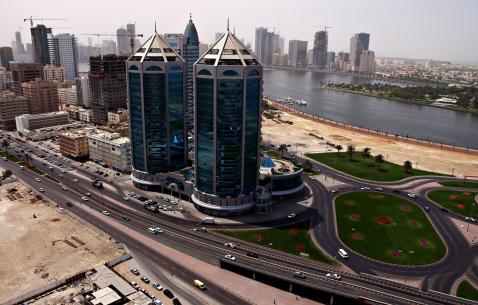 The third largest city in the UAE, Sharjah might not impress you with looming buildings and a dazzling atmosphere like Dubai would. But it will definitely leave you in awe of its underrated beauty, fascinating culture and an interesting history. Having the recognition of being the ‘Capital of Islamic Culture’, the city is also the capital of the emirate of Sharjah.

Historically, the emirate of Sharjah was one of the wealthiest towns in the region. It was around the year 1727 that the Al Qasimi clan took over the administration of the region and has been ruling it since then. In fact, Al Qasimi (also written as Al Qassimi) is one of the six ruling families of UAE.

If you embark on a Sharjah city tour, you will come across quaint mosques, ages old yet bustling souks (markets), museums that are trying to preserve the history and culture of the region, huge malls and the historical Sharjah Fort- Al Hisn. Want to know more about the city? Allow us to be your Sharjah travel guide.

Trivia: Did you know that Sharjah is the twin city of the Spanish city of Granada?

Essential travel information and Sharjah tips for your visit

Plan Your Trip To Sharjah

The best tours and activities in the city, guided by experts to give you a local insight to the best of Sharjah