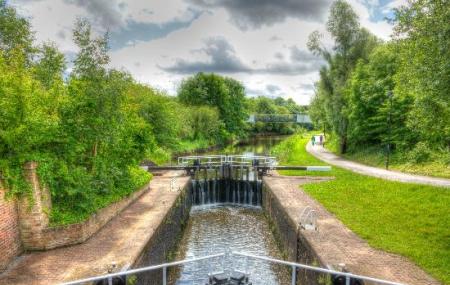 Find hotel near Sheffield And Tinsley Can ..

Some of you out there might be quite interested in taking a pleasurable walk alongside a beautifully structured canal trail, with landscape redefining itself as you go. If you do, Sheffield and Tinsley Canal Trail is where you should land. The trail, passing through industrial areas and brown-field sites to a boulevard of tree-lined countryside, is teeming with industrial architecture, flora and fauna, and the tranquility brought by still water.

The Sheffield Canal Company was formed in 1815 with the intention of connecting Sheffield industry with the navigable stretches of the River Don north of Tinsley, giving access to the River Ouse and the North Sea. Construction of the canal began in 1816, followed by the opening three years later on 22nd February 1819.The canal provided a boost to local industry, but faced strong competition following the spread of the rail network throughout the area. The canal fell into neglect during the First World War which placed heavy demands on national resources and labour power. Attempts to revitalise the canal followed the war, but were largely unsuccessful due to a lack of funding. The nationalisation of the canals after World War II brought a small increase in traffic, but even this proved to be temporary. The canal entered a period of decline as a commercial operation, but was restored and redeveloped as a scenic route in the early 1990s.

The canal trail walk is said to be a step back in time. You can spot lush green pastures, a Cemetery, Tinsley locks, Kingfishers, Heron, Tits, splendid bushes and shrubs, crab-apple trees, fishing ponds, the helter-skelter of industrial vibes, among other things. The walk is five miles long, from Lady’s Bridge (near to the Victoria Quay canal basin), to the City boundary at Meadowhall. It is accessible for all, including wheelchair users, walkers, cyclists and canoeists. No matter the means you use to travel, all of them will leave you equally satisfied. And the super tram route follows the trail. So if you tire out, there is always a tram station nearby. Both ends of the Trail have plenty of facilities such as cafes and toilets, and Meadowhall is a major shopping experience. You will be able to study the geographical architecture of the place on the go and get some great shots if the camera is your sidekick. Seriously, do not forget your camera.

How to Reach Sheffield And Tinsley Canal Trail

Love this? Explore the entire list of places to visit in Sheffield before you plan your trip.

Fancy a good night's sleep after a tiring day? Check out where to stay in Sheffield and book an accommodation of your choice.

People normally club together Tropical Butterfly House and Ecclesall Woods while planning their visit to Sheffield And Tinsley Canal Trail.