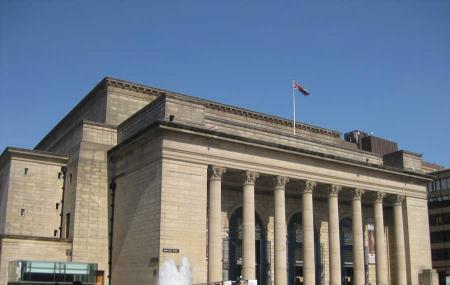 If you’re in the mood to catch some great shows ranging from screenings and theatrical productions to concerts and pantomimes, Sheffield City Hallis where you should head straight away. Popular for hosting great quality shows with good production value, the City Hall is a great place to have massive amounts of fun with all kinds of shows for everyone out there. It also houses a ballroom featuring a sprung dance floor. People rarely face a lack of something to do here because of its full monthly show schedules.

The hall is a Grade II listed building in Sheffield. It is currently operated by Sheffield International Venues. The large hall dominates Barker's Pool, one of Sheffield's central squares, which also contains the city's War Memorial. The building was designed in 1920 by E. Vincent Harris and the City Hall was officially opened on 22 September 1932. During the Second World War a bomb exploded in Barkers Pool, damaging the pillars of the building, the scars of which can still be seen to this day.

It is a neo-classical building with a giant portico with the famous Oval Hall, which boasts a seating for 2,271 people and it is commanded by an angelic chorus of singers. The hall combines natural light and beautiful wooden flooring and has an area used by a hidden choir, whose voices are carried through the building and down onto the audience. The Grand Willis III Organ is the largest in Sheffield with over 4000 pipes and four manuals. The organ sits in a chamber situated behind the large decorative grilles facing the audience.

The 500-seater Memorial Hall and the Ballroom host anything from after show parties to club nights and afternoon tea-dances. In 2005, the City Hall and its surroundings were refurbished and re-developed at a cost of £12.5 million. A good place to catch some culture.

How to Reach Sheffield City Hall

Love this? Explore the entire list of places to visit in Sheffield before you plan your trip.

Fancy a good night's sleep after a tiring day? Check out where to stay in Sheffield and book an accommodation of your choice.

83.97% of people prefer to travel by car while visiting Sheffield City Hall