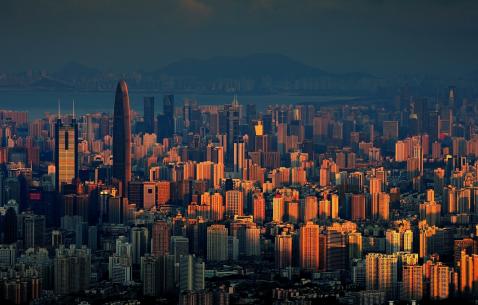 Picturesque skylines, bustling port and an adept economic centre is what Shenzhen greets its tourists with. Located in the Guangdong province of China, it is the third largest and one of the most populous cities of the country. It is renowned as the first Economic zone of China, thus attracting more people seeking employment day by day. Although it isn’t stuffed with a lot of historical heritage, it manages to make place in the trip planners of vacationers with a number of theme parks and cultural villages.

The earliest settlements in the region date back to the ancient times. The reign of Han Dynasty rulers turned it into a salt monopoly in the country. Out-bound trade towards India, Byzantine and Arabian regions flourished during the 4th century, making it one of the major commercial centres in the country. Over the years, Southern Song Dynasty and Ming Dynasty strongly influenced the human inhabitations in the region. Only in the latter’s period, evidences show that the name Shenzhen was first used. In 1980, it was officially announced as the first among the five SEZs, the reason being its vicinity to Hong Kong. Eventually, it became one of the biggest manufacturing bases in the world.

Most of the city is a concrete forest with searing high-rises that include both corporate facilities and residential areas. The streets are wide with small stores and cafés on the either side to cater to the needs of the citizens and tourists. The in-flow of population from various regions across China resulted in the diversification of the culture and cuisines. As a result, Shenzhen offers a lot of activities to do and events to take part in.

The tourism of Shenzhen is quite different from any other typical tourist destination. There are not many ancient places to visit in the city. However, Shenzhen makes up for it with numerous amusing theme parks and folk centres that emphasize on disseminating the historical and cultural information of China. Also, the soothing sea-side resorts and attractive beaches help you relax.

The itineraries of this one Chinese city will give you a feel of knowing various people and their culture from across the whole country due to its diversity. You also get to eat the delicacies of eight different cuisines in addition to the signature local dishes like Kejia.

So, experience a different kind of holiday this time by including Shenzhen to your vacation Planner.

Essential travel information and Shenzhen tips for your visit

Plan Your Trip To Shenzhen

The best tours and activities in the city, guided by experts to give you a local insight to the best of Shenzhen