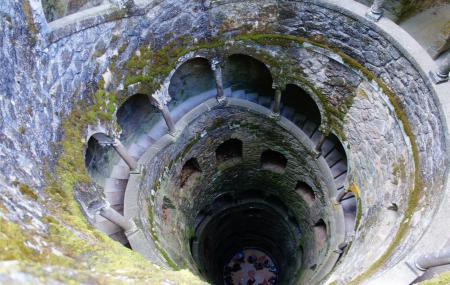 The Regaleira Palace is a huge, highly ornate structure and one that would put Downton Abbey to shame.

Built in the early 20th century, Quinta Da Regaleira is the result and manifestation of its owner’s wild imagination and the handiwork of a gifted Italian architect. Carvalho Monteiro wanted to use the 10 acres of land to create a place that resonated his deep interest in alchemy, the Free Masonry, Rosicrucians and Knights Templars. The millionaire and his architect sought inspirations from different time periods from Romans to the Renaissances to design the Regaleira Palace and surrounding dense forest.

The Palace has a rather otherworldly quality to it. The 5 different floors of the building were systematically allocated to servant’s rooms, kitchen, dining hall, gent’s rooms and ladies rooms. The magnificence of the structure has not yet faded away.

The Regaleira Chapel is a lavishly decorated structure, and one that needs to be admired first hand. The walls, stained glass windows, and ceiling depict beautiful, religious motifs. Look out for beautifully painted floors of the Chapel.

A considerable number of tunnels, grottoes and wells form a prominent feature of the Park landscape. These include Leda’s Cave, Labyrinthic Grotto.

A tourist magnet and a point of fascination for thousands of visitors, the Initiation Wells of Quinta Da Regaliera are an underground miracle! These are a pair of wells that go well below the ground level and were actually used for secretive initiation riotes. Also known as Inverted Towers, these stairs are built on the 'Winding Stair' architecture which imply to the death/rebirth allegory common to hermetic traditions.The tunnels serve as a link between the ceremonial wells that have been designed in the Tarot mysticism tradition. The beauty of these wells is just as magical as the powers associated with them.

Children will especially enjoy the bewildering design of the grottos and turrets. The air of sorcery at the Quinta da Regaleira is quite evident.

How to Reach Quinta Da Regaleira And The Inititation Wells

Love this? Explore the entire list of places to visit in Sintra before you plan your trip.

Fancy a good night's sleep after a tiring day? Check out where to stay in Sintra and book an accommodation of your choice.

88.14% of people prefer to travel by car while visiting Quinta Da Regaleira And The Inititation Wells

People normally club together Boca Do Inferno and National Palace Of Sintra while planning their visit to Quinta Da Regaleira And The Inititation Wells.