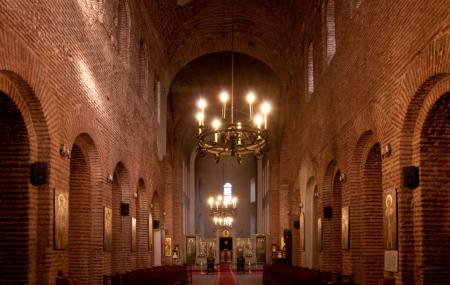 Though overshadowed in size by the nearby Alexander Nevski church, the Saint Sophia church is far more important to the city’s history. It was built in the 6th century on the site of some even older churches, and an ancient necropolis. During its hay-days in the 14th century, the church’s fame was so great that it conferred it’s own name to the city – the city of Serdika became the city of Sophia! It’s suffered some serious damage though – its famed wall paintings and some of its floor mosaics were destroyed by the Ottomans, and it’s minaret by a number of 19th century earthquakes.

The monument of an unknown warrior stands next to the church as a symbol of all those who’ve ever given their lives fighting for Bulgaria. The grave of the Bulgarian national writer Ivan Vazov is in the southwest garden of the church. Today, it’s a highly popular church for weddings and baptisms.

The church also houses the Museum of the Necropolis – there is a fee to see that.

How to Reach Saint Sofia Church

Love this? Explore the entire list of places to visit in Sofia before you plan your trip.

Fancy a good night's sleep after a tiring day? Check out where to stay in Sofia and book an accommodation of your choice.