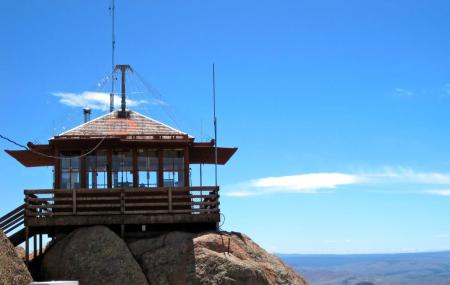 Located at the northern end of the main square, this Fire watch tower is a landmark of Sopron. Built on the remains of a Roman age town wall, the structure served as the Northern tower of the city since 13th century. The Barque balcony and helm roof were added after the great fire of 1676.

The tower guards played an important role of keeping a keen watch over the area and signalling the positing of the fire with lanterns at night and colourful flags at the day time. The double-headed eagle on the tower was gifted by King Ferdinand II and Queen Eleonora in 1622. The fire watch tower has suffered damages and is stabilised number of times since then.

This Fire watch tower is the symbol of loyalty. On 14th December 1921, a referendum was held in which Sopron and eight neighbouring villages expressed their wish to stay a part of Hungary instead of joining Austria. A neo-Baroque door frame and a statue entitles “The People of Sopron paying Homage to the mythological figure of Hungaria” was installed in the memory of the referendum.

Climb up the spiral staircase of 200 steps and enjoy a fantabulous view of this historic town from the former post of guards!

How to Reach The Fire Watch Tower

Love this? Explore the entire list of places to visit in Sopron before you plan your trip.

Fancy a good night's sleep after a tiring day? Check out where to stay in Sopron and book an accommodation of your choice.

People normally club together Kleinhoflein and Fabricius House while planning their visit to The Fire Watch Tower.