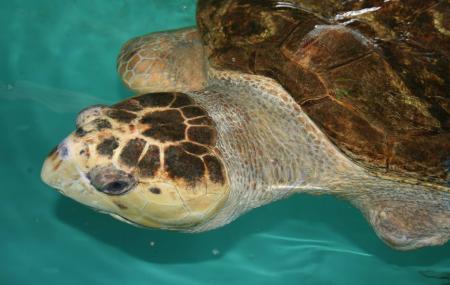 It would be a wise decision to visit the world renowned Sea Turtle, Inc on a visit to the South Padre island. It is an organisation formed for the rescue, rehabilitation and release of sea turtles. It was formed in 1977 by Ila Fox Loetscher, better known as “The Turtle Lady of South Padre Island”. Sea Turtle, Inc was originally formed to aid in the protection and rehabilitation of the endangered Kemp’s Ridley sea turtle which was on the brink of extinction. Today, it is a hospital with a mission to rehabilitate and release any injured sea turtles, increase awareness about their safety and habitat, and increase conservation efforts for all sea turtle species. It is a non-profit organisation and it generates its income from public donations and its gift-shop sales.

Educational presentations are offered throughout the day. These “Turtle talks” teach one about the mission of Sea Turtle, Inc. and about the various species of sea turtles found in the area.

On South Padre Island, April through November is identified as a sea turtle nesting season. Sea Turtle, Inc. identifies these nests and moves them to a safe compound until hatched. There are dozens of planned releases during the summer months. One needs to contact them for the exact dates.

Visitors are also able to do a self-guided tour.

How to Reach Sea Turtle, Inc

Love this? Explore the entire list of places to visit in South Padre Island before you plan your trip.

Fancy a good night's sleep after a tiring day? Check out where to stay in South Padre Island and book an accommodation of your choice.

92.86% of people prefer to travel by car while visiting Sea Turtle, Inc