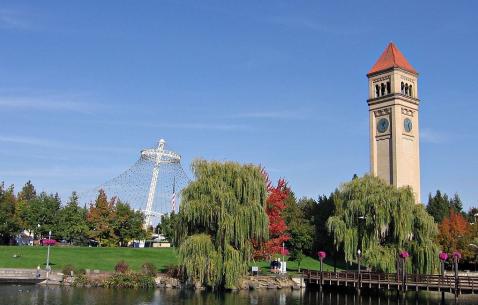 Located on the Spokane River west of the Rocky Mountain Foothills, Spokane is the second largest city in Washington, in terms of population. True to its 'Children of the Sun' translation, the city of Spokane has a sunny and a temperate weather that is ideal for exploring and endless shopping. Being a significant financial and the cultural center, Spokane has also grown to be an interesting tourist spot. Although the city is adorned by tall developed buildings, Spokane carries a medieval charm that is catchy.

Highlighted by a varied type of things to do and attractions to see, Spokane has a special something for everyone. Go on a family escapade to the Riverfront Park that is complete with a wide range of activities for both kids and families. Get a peek into history by exploring the Northwest Museum of Arts & Culture that comprises of exhibits and crowd entertaining shows. Head to the stunning Spokane waterfalls that glow in the nights with colorful lights. Explore the wonderful city by going on a bike ride along the Centennial trials park and be sure to take your cameras with you.

Some of the famous events in Spokane include Bloomsday race, Spokane Gay/Lesbian Film festival, and Spokane Hoopfest.

As you visit Spokane, you will be bequeathed with hues of saturated sunsets, azure skies, green fields, and crème toned administrative buildings. The city’s name is derived from the River Spokane, of which’s banks the city is settled. If there is one thing the city is popular for, it has to be the glorious May's annual Bloomsday Run, that is essentially the world's largest mass-participation running event! As you begin to explore the city you will realize the beckoning references of Roman architecture with the characteristic red, sloping roofs, stone buildings and lots of quaint bridges. To bask in all this beauty, there are several parks sprawling across t city. These include Manito Park and the Riverfront Park among several smaller ones. Make sure to get a breather at the massive Spokane Falls! With all this and more the Spokane Washington tourism is gradually inclining.

Essential travel information and Spokane tips for your visit