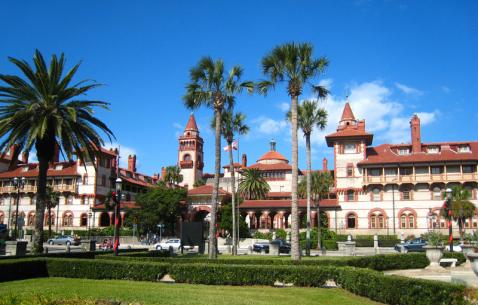 Plan a trip to Saint Augustine and walk down the nation’s oldest city and have fun under the sun. Immerse yourself in the history and the mystery of this city. From the Alligator Farm Zoological Park to the Flagler College and Ripley’s Believe it or Not Museum. The city is studded with attractions and historic sites. Experience the horror and mystic on guided tours by experienced travel guides at night beneath the stars. Appreciate the history behind Fort Mose, chat with the local people and enjoy a vacation at St. Augustine.

Pedro Menendez de Aviles sighted land on August 28, 1565. As this was the feast day of Augustine of Hippo, the territory was named San Agustin. The Spanish sailed through the St. Augustine Inlet into Matanzas Bay and disembarked near the Timucua town of Seloy on  September 7. Menendez's objective was to build a quick fortification to protect his people and supplies as they were unloaded from the ships, and then to take a more proper survey of the area to determine the best location for the fort. The location is now the Fountain of Youth Archaeological Park.

St. Augustine was planned to be a base for additional colonial ventures across what is now the South-eastern United States, but such efforts were hampered by the Native Americans. In 1566 St. Augustine was burned down by one of the Native American chiefdom and the Spanish settlement had to transfer to another location on Anastasia Island. The settlement also faced attacks from European forces. English privateer Sir Francis Drake raided St. Augustine, burning it and driving surviving Spanish settlers into the wilderness. However Drake had to leave as due to lack of adequate forces or authority to establish an English Settlement.

The Spanish did not import many slaves to Florida for labour, as it was basically a military outpost instead encouraged their slaves to escape for sanctuary in Florida. If the fugitives converted to Catholicism and swore allegiance to the king of Spain, they were given freedom, arms, and supplies. Spanish Governor Manual de Montiano in 1738 established the first legally recognized free community of ex-slaves, known as Gracia Real de Santa Teresa de Mose, or Fort Mose.

Henry Flagler arrived in St. Augustine in the 1880s. He was the driving force behind turning the city into a winter resort for the wealthy northern elite. Flagler bought a number of local railroads and merged them into the Florida East Coast Railway; it built its headquarters in St. Augustine. He built Venetian-style Memorial Presbyterian Church and the Flagler Hospital and the Fountain of Youth. During World War II, St. Augustine hotels were used as sites for training Coast Guardsmen. It was a popular place for R&R for soldiers from nearby camps.

Set out on foot early morning and visit the attraction this city has to offer. Known as the Ancient City, St. Augustine enjoys a year round mild climate suitable for tourists who are on vacation. This city is located between the North East and Central East Florida and it is easy to reach the nearby airports of Jacksonville, Orlando, and Daytona. Some 2 million people visit St. Augustine annually, on a quest to discover a unique historic part of America. While the honoured Castillo de San Marcos draws most crowds, others find solace in the churches, adventure in the forts, and relaxation on the beaches.

The City of St. Augustine maintains architectural control over the colonial city. In order to retain all its historical sites, they take great care to insure that the urban modern area respects the past.

Essential travel information and St Augustine tips for your visit

Plan Your Trip To St Augustine

The best tours and activities in the city, guided by experts to give you a local insight to the best of St Augustine