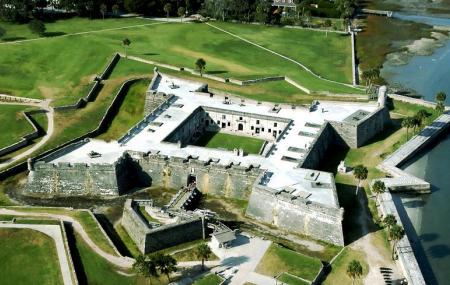 The masons from Havana laboured to produce blocks to construct a monument. They baked oyster shells in kilns to produce a fine white powder called lime which was then mixed with sand and fresh water to produce mortar. After 23 years of hard labour, and sheer determination the Castillo de San Marcos was born.

The Castillo de San Marcos embodies the clash between cultures and grim history as nation after nation tried to make it their own. It echoes the struggles of an earlier time and the walls provide evidence of numerous historic events including the imprisonment of Native American tribes. Plains tribes such as Howling Wolf of the Southern Cheyenne drew while incarcerated. Their art known as Ledger Art are etched on the walls depicting events of valour and personal feats in battle and hunting. Made-up of coquina, a fundamentally indestructible limestone comprised of broken sea shells and coral, the walls of the fortress remained impenetrable through 300 years of enemy shelling and pounding by violent storms.

The Castillo de San Marcos is the oldest masonry fort in the continental United States. Located on the shore of Matanzas Bay in the city of St. Augustine, Florida, construction began in 1672. The construction began at the command of Francisco de la Guerra y de la Vega after the destructive raid of the English pirate Robert Searles who assaulted and plundered the settlement. At the same time the threat of English colonization in the north had significantly increased, and Queen Mariana of Spain authorized the construction of a stone fortification.

After 1702, it was decided to change and improve the Castillo and the city of St. Augustine itself. The interior rooms were pulled out into the courtyard to make them deeper and vaulted arch ceilings were constructed to make the rooms bombproof. These vaulted ceilings also served to make it possible for heavy garrison guns to be put all around the perimeter of the gun-deck rather than just in the corner bastions as the Castillo had originally been built.

The Castillo has never been conquered despite attacks by English General James Oglethorpe who fired cannon balls from the tip of Anastasia Island, but it was no match for the unusual consistency of coquina which absorbed the blast rather than crumbling.

After Britain gained control of Florida in 1763 St. Augustine became the capital of British East Florida, and the fort was renamed Fort St. Mark. However in 1783 she went back as a possession of Spain. But by 1821 the fort became a United States Army base and was renamed Fort Marion. In 1942 the original name, Castillo de San Marcos, was restored by an Act of Congress. The fort was declared a National Monument in 1924.

Love this? Explore the entire list of places to visit in St Augustine before you plan your trip.

Fancy a good night's sleep after a tiring day? Check out where to stay in St Augustine and book an accommodation of your choice.

81.29% of people prefer to travel by car while visiting Castillo De San Marcos