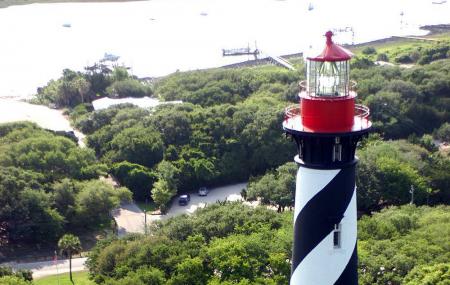 Lying across the bay the lighthouse is illuminated like a beacon. It is impressive in in black and white spiral and was used as a lookout post for enemy ships and submarines which frequented the coastline. A light was emitted from a system of lamps and lenses and used as an aid to navigation for maritime pilots at sea or on inland waterways. The Saint Augustine Lighthouse was built in 1874 and converted into a museum in 1994.

The original lighthouse of St. Augustine was a wooden watchtower built by Spaniards in the late 1500s in order to shelter themselves from seafaring attackers and to navigate other Spanish ships and traders to their lively port. Unfortunately, the watchtower was burned to the ground by Sir Francis Drake during an attack in 1586. Following this, a coquina tower was built on the site in 1683 from the ruins of a stone chapel. This lighthouse lasted 200 years, but fell to shoreline erosion in 1880. As a result of the threat of erosion, the current tower was built further inland in 1874.

The St. Augustine Lighthouse is an attractive and informative museum. Enjoy the most spectacular view in Northeast Florida from the top overlooking the Matanzas Bay and the Atlantic Ocean from Anastasia Island. Climb up 219 steps to discover the glorious history of this lighthouse in the Keeper’s House museum. Archaeologists have discovered a number of historic shipwrecks along with other maritime sites such as breakwaters, plantation wharf remains, and the remains of Florida's first lighthouse.

The museum also researches boat building and the history of the local and regional shrimping industry, and maintains an assortment of World War II artefacts focusing on the history of the U.S. Coast Guard in St. Augustine. The Lighthouse also maintains a volunteer-driven heritage boat building program, which has built a number of traditional wooden boats from various time periods in the port's history.

The St. Augustine Lighthouse and Museum is dedicated to the preservation of the past and keeping alive the story of the nation's oldest port. By offering educational opportunities, the museum maintains the memories of those who came before us. It also offers maritime archaeological research, summer camps, home school days and hands on tour.

There are Program scholarships for underprivileged youth, internships, and scholarly investigations. The St. Augustine Lighthouse lobbies for national preservation issues in Tallahassee and on Capitol Hill. They work directly with government agencies to insure that America's castles survive for generations to come. Preserving the Past for Future Generations. The lighthouse also has an oral history library in its permanent collection that continues to grow.

They are an official partner of the Library of Congress Veteran's History Project. They are enthusiastically seeking local stories to share about this great time in the First Coast's history. They work to be the finest light station and maritime museum in the world.

How to Reach St Augustine Lighthouse And Museum

Love this? Explore the entire list of places to visit in St Augustine before you plan your trip.

Fancy a good night's sleep after a tiring day? Check out where to stay in St Augustine and book an accommodation of your choice.