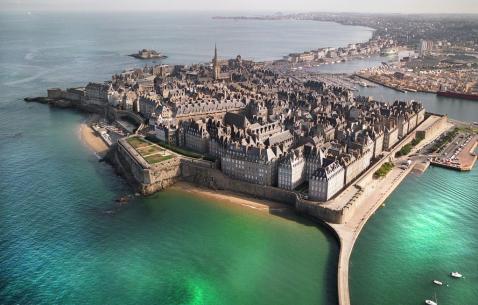 An old walled-city in the Brittany Region of France, Saint Malo is sub-prefecture of the Ille-et-Vilaine situated by the English Channel. The city which was once notorious for pirate activities is now a famous tourism destination, especially for the people visiting from the Europe and UK.

The history of Saint-Malo dates back to the middle ages, when it was a fortified town at the mouth of River Rance. But the human inhabitation in what is known as the modern day Saint-Malo had its roots traced back to the early Sixth century. It later became the centre for the notorious activities of French pirates and privateers, thus earning a moniker ‘Land of the Corsairs’. During the Second World War, a large part of the city was destroyed by American bombings. Fortunately, the city was reconstructed later during a twelve year span (1948-1960).

Saint-Malo finds a place on a number of trip planners because of its attractive beaches and many ancient buildings. The city’s itineraries include a magnificent citadel built in a rocky island as well as many other historical places both in the old town and the mainland which are linked through a modern harbour.

The modern day St-Malo is equally beautiful with a charming port, cobblestone streets, and rows of intensely hued granite mansions, hotels and restaurants. It is said that the city has one of the highest concentration of restaurants in the whole of Europe.

With everything St-Malo has to offer its tourists, it definitely becomes one of the best places to visit this holiday. So, add Saint-Malo to your vacation planners and start or end your trip to Brittany at this picturesque old city. Head down to the tourist information centre to get the travel details, maps and other stuff. After spending the day visiting the important tourist spots, release your stress with the activities to do by the city’s vibrant streets and beaches.

Essential travel information and St-malo tips for your visit