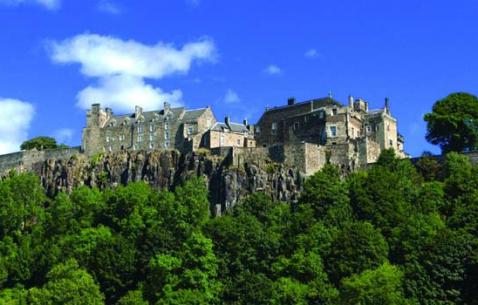 Stirling (/ˈstɜːrlɪŋ/; Scots: Stirlin; Scottish Gaelic: Sruighlea [ˈs̪t̪ruʝlə]) is a city in central Scotland. The city is clustered around a large fortress and medieval old town. Stirling is the administrative centre for the Stirling council area, and is traditionally the county town of Stirlingshire. The city is located several miles to the west of the mouth of the River Forth. Historically it was strategically important as the "Gateway to the Highlands", with its position near the Highland Boundary Fault between the Scottish Lowlands and Highlands and has been described as the brooch which clasps the Highlands and the Lowlands together. Its historical position as the nearest crossing of the Forth to the river mouth meant that it attracted invaders. The beast of Stirling is the wolf. According to legend, when Stirling was under attack from Viking invaders, a wolf howled, alerting the townspeople in time to save the town. Once the capital of Scotland, Stirling contains the Great Hall (restored 1999) and the Renaissance Palace (restoration completed 2011) within Stirling Castle. Stirling also has its medieval parish church, the Church of the Holy Rude, where King James VI was crowned King of Scots on 29 July 1567. The Holy Rude still functions, with a service every Sunday. Stirling is a centre for local government, higher education, retail, and industry. The 2011 census recorded the population of the city as 45,750, the wider Stirling council area has a population of 89,850. The majority of the population is located in its southeast corner, in the City of Stirling and in the surrounding area. One of the principal royal strongholds of the Kingdom of Scotland, Stirling was created a Royal burgh by King David I in 1130, which it remained until 1975, when the burgh as an administrative unit was abolished. In 2002, as part of Queen Elizabeth II's Golden Jubilee, Stirling was granted city status. Wikipedia

Situated along the River Forth, in the centre of Scotland, separating the highland mountains and the lowland cities, is the historic city of Stirling. Granted city status in 2002, with a population of around 35,000, it is the smallest city in the country. The city has grown around the famous Stirling Castle, home to several historical monarchs and dynasties.

Plan Your Trip To Stirling

The best tours and activities in the city, guided by experts to give you a local insight to the best of Stirling