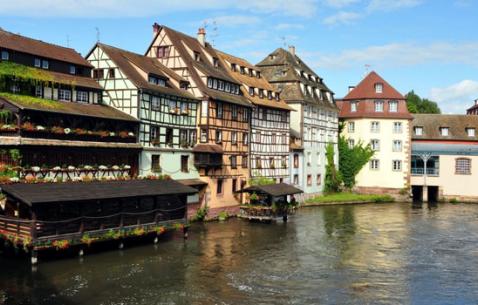 Strasbourg means the City at the Crossroads, and lives up to that name and then some. The place has been a human dwelling for 600,000 years, and it was permanently settled by proto-Celts around 1300 BC. This developed into a Roman town called Argentoratum. Over the millennia its seen a good lot of conflict, declaring itself a free republic, slipping into German rule for over a century, then back to France’s.

Today, the city is special for its rather mixed heritage – there’s almost as much German influence in its history as French. The locals are equally comfortable with either language. And that’s not the only thing it’s got going for it - Johannes Gutenberg created the first printing press here; it’s historic centre was the first of it’s kind in the world to be declared a UNESCO World Heritage Site; it’s one of the seats to the European Parliament; it’s University is the second largest in France; and there’s a unique blend of Catholic and Protestant culture.

It’s architecture is elegant yet grand; it’s districts are picturesque and unique; it’s museums are comprehensive and grow consistently; it’s park are an incredible amount of fun; it’s Christmas market is to die for; the Alsatian cuisine is mind-blowing; and it’s pretty any given time of the day or night.

History! A settlement for more than half a million years, Strasbourg has seen and recorded the best and worst of European Times.

Culture! A strange mix of French and German, Catholic and Protestant, and quaint and modern – the city

Significance! One of the largest cities in France, it birthed the printing press; is one of the seat to the European Parliament and has France’s second largest port and second largest University.

Food! There’s just no limit to how much you can praise Alsatian cuisine.

Essential travel information and Strasbourg tips for your visit

Plan Your Trip To Strasbourg

The best tours and activities in the city, guided by experts to give you a local insight to the best of Strasbourg