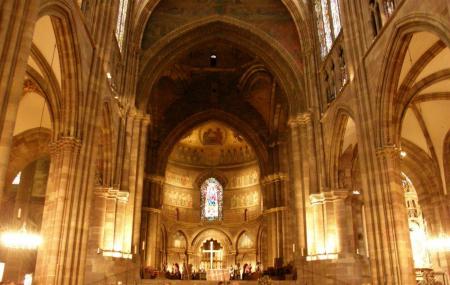 One of Europe’s most stunning examples of Gothic Architecture, the cathedral is built on the site of a small roman temple. The Bishop who commissioned it in 1015 had wanted a Romanesque influence, but during the renovations in the 12th Century, Alsace was in the tight grip of Gothic influence. The building truly belongs to the city; after the Bishop’s downfall, the municipality and the citizens themselves funded the completion of the church. Completed in 1399, this magnificent construct held the title of the tallest building of the modern world for over 400 years for it’s 142-metre spire. It was converted into a Protestant Church (1521 – 1681) before reverting Catholicism under France’s rule. Despite it’s majesty, the cathedral looks like it’s about to fly off the ground and soar into the sky – it looks light and graceful.

Things to observe include:

There is almost nothing bad to be said about the place. It’s grand in the day; it’s grand in the evening. Put the cherry on the top of your experience here by attending a mass (check website for timings).

Love this? Explore the entire list of places to visit in Strasbourg before you plan your trip.

Fancy a good night's sleep after a tiring day? Check out where to stay in Strasbourg and book an accommodation of your choice.