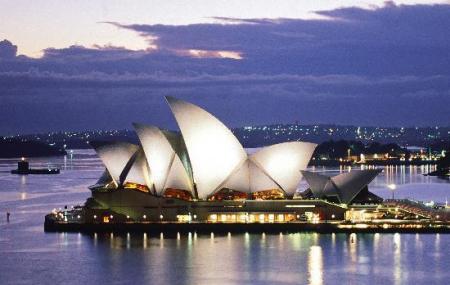 The Sydney Opera House is famous for its architecture as well as for being one of the largest concert hosting buildings in the world. The estimated budget for the construction of the House was estimated around AUD7 million. However, at the end the expense went upto AUD102 million. It bears the signature shell work of the exterior which makes it an iconic structure. But it is not just beautiful; it serves its purpose too and how! It can accommodate a huge number of people making it perfect for international performances as well. Moreover it hosts more than fifteen hundred performances every year! There are several performance halls in the Sydney Opera house making it famous worldwide as a performing arts venue. It hosts a huge and amazing variety of performances with artists from around the world. It is thus culturally very significant.

It is also situated in the province of the New South Wales, and along the coast of the adjoining Sydney cove and the Farm Cove, and is a neighbor to the Sydney Harbour Bridge. This scenic location makes its site truly worth a visit from the aesthetic point of view as well. As a result, the Opera House of Sydney is one of the best and most imposing tourism destinations in the world. If you have just one day in Sydney, it's the Opera House that will be the first thing in your itinerary.

The Opera House in Sydney is a prime attraction which no body misses even though there are high Ticket prices for Sydney Opera House. The best way to explore this classic attraction is to take up a guided tour and know its history and culture better. Sydney Opera Tickets are a gateway to understanding the city better. Add this opera house to your Sydney trip planner and grab great deals on tours and tickets.

How to Reach Sydney Opera House

Love this? Explore the entire list of places to visit in Sydney before you plan your trip.

Fancy a good night's sleep after a tiring day? Check out where to stay in Sydney and book an accommodation of your choice.

People normally club together Sydney Harbour Bridge and The Rocks while planning their visit to Sydney Opera House.