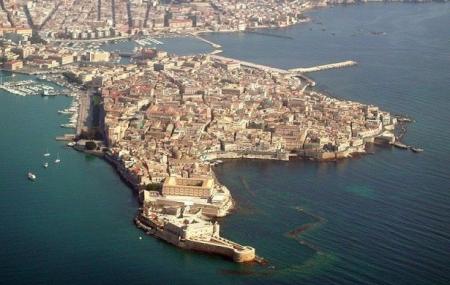 Adjoining the mainland of Syracuse, the Island of Ortigia welcomes you to one of the most interesting archaeological sites in the world that date back to the Greek times. The whole town was rebuilt several times since the Greek settlement and with its medieval lanes, Baroque buildings and historic churches, a walk here is anything less than enchanting.

The beauty of the whole town is that it maintains this historic world away from the modern buildings- resembling almost a theme park but with priceless architectural touches and gorgeous public squares.

The famous attractions include ‘Via Cavour’ piazza where you can gorge on local delicacies at one of the restaurants and leave with a souvenir, the Castello Maniace fortress that dates back to the 13th century (forming the extreme tip of the island) and the Fonte Aretusa that makes evening walks a romantic affair.

The Piazza Duomo is another tourist favourite known for the famous Greek Temple of Athena while the Galleria Regionale di Palazzo Bellomo Art Museum is loved for its exclusive art collection that covers the range from the Byzantine era to the 18th century. When here, don’t forget to explore the underground tunnels of Ipogei di Piazza Duomo (used during World War II) and the underground Jewish ritual bath that was a secret up until its discovery in the 20th century!

How to Reach Ortigia

Love this? Explore the entire list of places to visit in Syracuse before you plan your trip.

Fancy a good night's sleep after a tiring day? Check out where to stay in Syracuse and book an accommodation of your choice.

66.67% of people prefer to travel by car while visiting Ortigia