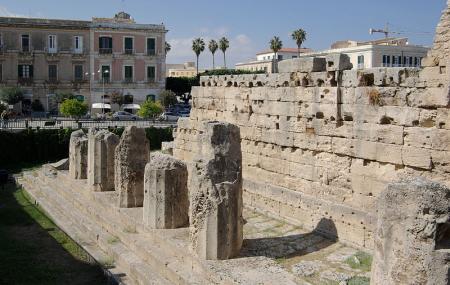 Find hotel near Temple Of Apollo

The Temple of Apollo dates back to 6th century BC and is the oldest Greek temple in Sicily and the second oldest in the world. Over the course of history, the temple was transformed into a  Byzantine church, a Mosque and into a Norman church. However, today, its ruins embrace its varied history and even though only two of its original 22 columns stand tall, the scattered ruins still manage to spin a rustic charm for its curious visitors. Originally, the shorter side used to have 6 columns and the longer side had 17 columns and a second row of columns were laid down before the pronaos (that represented the front section of the church).

A short walk around the ruins and you can spot the fences on the west and south side. You can also find the remains of a tower on the west side of the structure that dates back to the Byzantine era.

Highlights of the place include:

How to Reach Temple Of Apollo

Love this? Explore the entire list of places to visit in Syracuse before you plan your trip.

Fancy a good night's sleep after a tiring day? Check out where to stay in Syracuse and book an accommodation of your choice.

77.78% of people prefer to travel by car while visiting Temple Of Apollo

People normally club together Santuario Madonna Delle Lacrime and Duomo Di Siracusa while planning their visit to Temple Of Apollo.