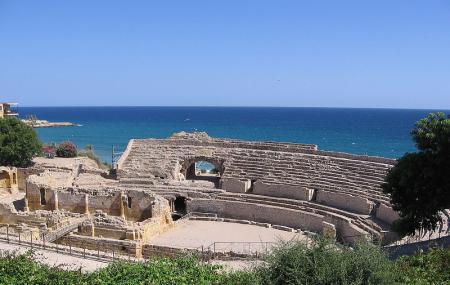 Overlooking the Mediterranean Sea, the Amfiteatre de Tarragona dates back to the late 1st century or early 2nd century BC. During its hey days, the amphitheater was used for gladiator fights and animals hunts and was a main center for entertainment and important events. When the theatre was constructed, it could seat around 14,000 people!

However, all through the 3rd century, the place lost its importance after Christianity became the official religion of the city. In the 6th-century stones from here were even dissembled to construct a basilica in memory of the Christian bishop and his deacons who were burned at the arena on the orders of Emperor Valerian. For nearly 10 centuries post that, the Visigothic church was built here in the 12th century in Romanesque style of architecture that was demolished in the early 20th century.

The place even served as a prison in 1780! Restoration for the theatre began in the mid 20th century and since then it has become one of Tarragona’s historic treasures. The amphitheater ruins are still well preserved and you can climb the steps and see the dungeons from where warriors would enter the main arena. The inscription displayed at the podium that dates back to the reign of Elagabalus (3rd century AD), is an interesting find even for casual visitors and is something you simply cannot miss!

How to Reach Amfiteatre De Tarragona

Love this? Explore the entire list of places to visit in Tarragona before you plan your trip.

Fancy a good night's sleep after a tiring day? Check out where to stay in Tarragona and book an accommodation of your choice.

58.33% of people prefer to travel by car while visiting Amfiteatre De Tarragona