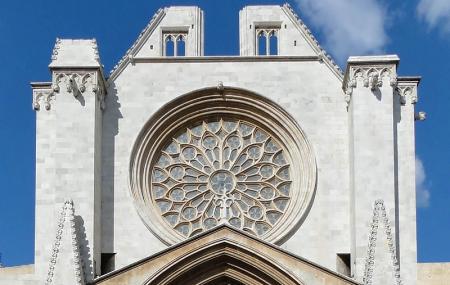 Built in the early 20th century on the former grounds of a Roman temple, the  Cathedral Basilica Metropolitana Primada de Tarragona grew with time to incorporate its current Romanesque and Gothic architecture.

The Romanesque architecture dates back to the early 12th century when the cathedral only had a single nave. However, in the late 12th century the cathedral was transformed into a Basilica and Gothic elements were added to the structure.  The construction included adding 2 aisles and one more apse to complement the older one. The cross vaults that cover both the apses has become one of the highlights of the design of the cathedral.

In was only during the late 20th century that restoration work was carried on here and the ruins of the Roman temple were found under the nave. Today, the cathedral has become a piece of history as well as art. The beautiful façade, columns with statues of saints, stunning arched roof, old tapestries and chapels of various saints, all have art accents that accentuate its beauty.

The main altar with distinct use of alabaster was carved out by Peref Johan in the early 15th century and has motifs of leaves, figurines of children and statue of Dalmau de Mur, Pere Sagarriga and Mother Mary.

The main octagonal dome that dates back to the 13th century along with the pavement that has geometrical patterns made from a variety of coloured marbles, is a stunning view in itself.

The cathedral has a small museum on its western side. A gorgeous cloister that has a central courtyard, 4 galleries, and a fountain, is a beautiful place for taking a few photos. You can also find the remains of the walls of the Roman temple here preserved by the city. With its exclusive artwork being a crowd-puller, the church does offer a large variety of design- making it a wish-list spot for art lovers.

When you visit the place, don’t forget to climb the Bell tower that stands at a height of 70 meters and offers surreal views of the city!

Love this? Explore the entire list of places to visit in Tarragona before you plan your trip.

Fancy a good night's sleep after a tiring day? Check out where to stay in Tarragona and book an accommodation of your choice.