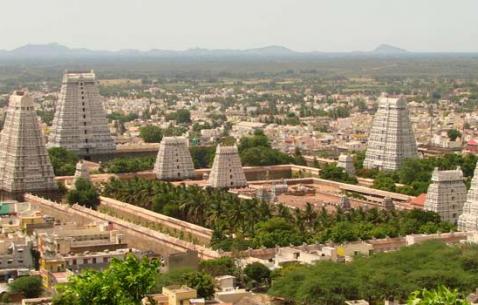 Thanjavur is city in Tamil Nadu which is famous for its rice production and its legacy in the fields of Art, architecture and literature. It is named after a mythological figure called Tanjan and rose to prominence during the Chola dynasty called Tanjore in British times, this city is famous for its temples and the distinct south Indian Chola style of architecture. The cultural glory of it is reflected in the grand monuments in the city. Thajavur was associated with the Chola dynasty since the 8th century. It came to prominence during this time and served as their capital for the longest time. The Cholas left their mark on the cuisine, the culture and scholarly institutions. Ekoji, the half brother of the Maratha Legend Shivaji captured and set up the Thanjavur Maratha Kingdom. Many people migrated to Thanjavur during his time and their ways blended with the local traditions.

Thanjavur has developed as an important centre of silk weaving. Silks saris produced here are exported all over the world. Travelling to Thanjavur and not indulging in some silk shopping feels very incomplete. The trade and commerce has flourished in Thanjavur but it remains an agricultural area primarily. It grows more than half of the rice produced in Tamil Nadu plus yields other crops like blackgram, banana, coconut, gingelly, ragi, red gram, green gram, sugarcane and maize. Students take a trip to Thanjavur to undergo intense training in the South Indian classical arts, be it dance or music. Many prominent artists have nurtured their talent here. Bharatnatyam, Carnatic music, literature in Tamil, Telgu and Sanskrit are a part of this city’s lifestyle.

The city is a heaven for craft lovers. Not only can you pick up some readymade items, this gives you an entirely new world of things to do in Thanjavur! You can enrol in workshops that give classes in making the traditional Thanjavur dolls and paper mache articles. Sangeeta Mahal, which has a permanent handicrafts exhibition, is a place that will interest you. In recent times, Tanjavur has become an important pilgrim centre and tourist destination. Bhrihadeeswarar Mandir, a UNESCO world heritage site is the main attration of the city. The Thanjavur dancing doll, Tanjore style of paintings, Tanjore art plates and artistic plates are unique products that tourists take back as souvenirs with them. Local touts try to bluff visitors with exorbitant prices so purchase them from the old area of the city which is not that tourist oriented.The Palace of Thanjavur Marathas, The SaraswatiMahal Library, the shwartz church, five museums in the city and the Shivganga Park are some of the tourist attractions in the city. This is a perfect place for a traditional south Indian holiday with family.

Essential travel information and Thanjavur tips for your visit

Plan Your Trip To Thanjavur

The best tours and activities in the city, guided by experts to give you a local insight to the best of Thanjavur