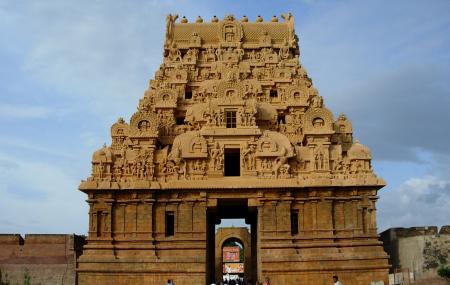 Emperor Arulmozhivarman, popularly known as Raja Raja I was the founder of the magnificent Brihadeeswara Temple. History says that the king got the idea of this temple in a dream in which God instructed him to build the temple as a symbol of the grandeur of the Tamil king, his wealth and culture. The temple was built within a very short time of 5 years. The king wanted it to be a symbol of his power and vision.

The temple was then the place where all the royal ceremonies would take place, especially festivals of Lord Shiva. This temple is the perfect example of Indian culture, especially the ancient Chola designs. The architecture is broadly based on symmetric and geometrical patterns. This can be seen from the number of columns and square motifs build within the temple. This Dravidian temple is a showcase of brilliant achievements of the Chola Empire in the fields of architecture, sculpture, painting and bronze casting.

According to scriptures, the very talented engineer and architect behind this monument was Kunjara Mallan Raja Raja Perunthechan. He made all the designs based on the studies of ‘vaastushastra’. This temple made of granite has-

The prime deity here is Lord Shiva and the other temples are for huge figure of Gods such as Dakshinamurthy, Surya and Chandra. This is the only temple which has the idols of the ‘gods of Directions’ namely- Indra, Agni, Yama, Nirti, Varuna, Vayu, Kuber and Isana.

How to Reach Brihadeeshwara Temple

88.33% of people prefer to travel by car while visiting Brihadeeshwara Temple