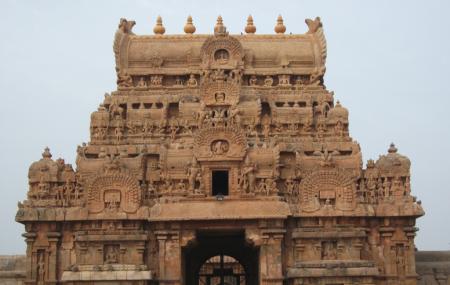 The Great Living Chola temple is referred to the collection of three famous granite temples all dedicated to Lord Shiva. These are the Brihadeeshwara temple in Thanjavur, The Gangaikonda Cholapuram Temple and the Airavateshvara temple at Darasuram. The latter two were recently added to the world heritage extensions.

These temples built during the reign of the Chola kings are spread over the major part of South India and are the most important attractions of the regions. These are symbols of the wealth, power and rich culture of the people and artists, the royal commitment and domain of the kings during that time.

The most important figure that comes into light when we talk about the Great Living Chola Temples is that of Rajaraja CholaIwhose contribution is clear especially after seeing the splendid construction of the Brihadeeshwara Temple. Later his son Rajendra Chola I expanded the territory even more and developed the former campaigns also. He then built the perfect capital in the form of Gangaikonda Cholapuram and in it the Temple of Gangaikondacholisvara.

The city of Thanjavur, the location of the living temples is also called Tanjore in modern times. It is situated on the south bank of River Cauvery. It is said to have derived its name from a demon named Tanjaneho was according to the legends later killed by Sri Anandavalli Amman and Sri Neelamegapperumal. It is most popularly known as the capital of the ancient Mutharayars and Cholas when they were at the peak of power and since those times Thanjavur is an important place of culture and politics in south India. It is a rich area which was ruled by the Nayakas and the Marathas after the decline of the Chola Empire.

The city has around 90 temples which are symbols of the culture and heritage. There are three most important of course. Firstly, the Brihadeeswara Temple, which means the big temple. It was a result of a command given to Rajaraja I in his dreams. This is the most important symbol of Chola glory. It is said to have the highest entrance in the world. The splendid architecture and carvings are combined with the lucid design. This has always been an example for many other master pieces not only in South but also in the South East Asia.

Secondly, we have to talk about the Gangaikonda Cholapuramtemple which was built by Rajendra Chola I in his Capital GangaikondaCholapuram. It was built to celebrate his victory over the northern states and also to show his power to his subjects. This temple was also dedicated to Lord Shiva.

Thirdly, the Airavateshvara Temple, which is smaller than the rest of the two but with a beauty even more. The exclusively designed temple, built like a chariot, with musical steps. This was built by Rajaraja II and later maintained by the Pandyas. The beautiful carvings and the extraordinary architecture make this temple an unique one compared to all other temples in the world.

Lastly, special mention of the Kampahareshwarar temple which is not included in the heritage group of the UNESCO but is worth a mention given its stunning shape and beauty. This one also has the shape of a chariot. It was built by Tribhuvana Chakravarti to celebrate his victory on some northern states. The entrance has a massive height. The striking feature of this temple is the inscriptions of the parts of Ramayana in the interiors of the temple. There is also a rare statue of Lord Shiva in the Sarabha form which he took to subdue Narasimha.

72.34% of people prefer to travel by car while visiting Great Living Chola Temples