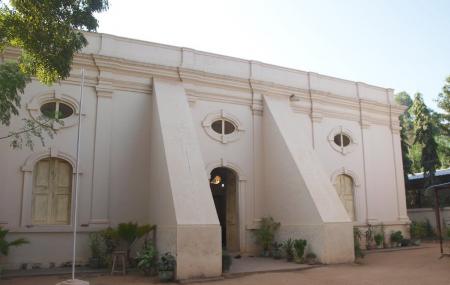 Thanjavur was originally the kingdom of the Chola kings and the nayaks. Later after the fall of this kingdom the Marathas took over and ruled this place for more than 180 years. Within this time there was the entry of the British eho started rising in power but were then defeated by the French colonials in the 18th century. The wealth was overflowing the kingdom due to these foreign invasions. This was the time when the Schwartz Church was built by the Maratha King Serfoji II.

The church was a symbol of respect to the Danish Reverend Frederick Christian Schwartz. It was completed by the Danish Missionary under the instructions of the Maratha ruler. Schwartz lived just behind the church and later, the house was turned into a school much after his death.

Located on the eastern side of the Sivaganga Gardens, this church is an excellent combination of Maratha and French architecture. It is basically a simple building but it surely has some very stunning features such as- the doorways exquisitely designed and the walls and pathways all done in a very French manner.

The most remarkable feature of the church complex is the white tablet gifted by the very kind king Serfoji II as a sign of respect to Scwartz. This is a marble tablet made by John Flaxman is placed on the western part of the premises. On the marble is sculpted the scene of the reverend blessing his royal patron before dying. The two are surrounded by many ministers and followers of the church.

The church is surrounded with lush greenery and tall shady trees which are apt for a religious ambience. This place is a must visit to get an insight into the colonial era of Thanjavur.

How to Reach Schwartz Church

89.86% of people prefer walking in order to reach Schwartz Church

People normally club together Thanjavur Palace and Hotel Karthik while planning their visit to Schwartz Church.