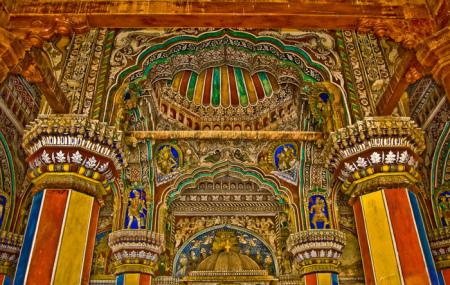 Built in the heart of the capital of the Cholas, is the beautiful Thanjavur Palace. Although most of the beauty is now turned into ruins due to the natural pressures of thunder, strong winds etc, it still seems to behold the glory of the Chola and the Maratha rulers. This palace is said to be the official resident of the Bhonsle family who were the last rulers of Thanjavur. This place is also known as Aranmanai.

The thanjavur Palace is said to have been built by the Thanjavur Nayak ruler Vijayaraghava Nayakkar. Later after their fall, it was again renovated by the Thanjavur Maratha rulers. They stayed in the palace and held the surrounding forts even after the deposition of the last king Sivaji II.

At present there are two forts namely, the Chinna Kottai (small fort) and Periya Kottai (big fort). There are also the Bell Tower, arsenal tower and the two durbar halls of the Nayaks and the Marathas. It is a famous tourist destination that attracts thousands of tourists annually. The rich culture of that era can be seen from the vast collection of antiques, images, paintings and scriptures here. The stone work resembling that of the Brihadeeswara Temple and the Gangaikonda Cholapuram temple takes you back to the golden days of the Nayaks and the Marathas.

There are also bronze sculptures and other statues made of metals in the interiors of the palace. The several statues of Hindu Gods and Goddesses make it clear that the early royals were very religious people.

The main attractions of this monument are the ancient art and glass paintings, especially the unique sculture of ‘bhikshatanamurti’. It is another form of Lord Shiva in the guise of a beggar.

In the palace, you will also find-

The whole palace is under renovation also to restore the remaining grandeur of it. But nonetheless you can enjoy your ride on the time machine as soon as you enter the palace.

How to Reach Thanjavur Palace

94.31% of people prefer to travel by car while visiting Thanjavur Palace