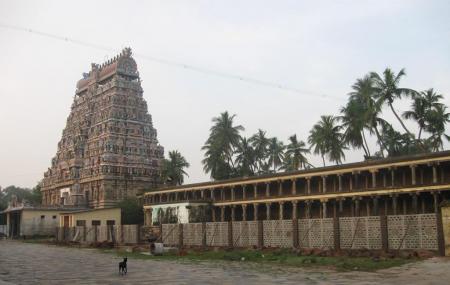 This temple is said to be a 1000 years old or even more than that. There is no proper evidence of when it was formed but there are many proofs of the Chola kings worshipping in this temple. Legendary story behind this temple is that Bhoomadevi approached Perumal and said that she also deserved a place in his heart as she was nothing less than Mahalakshmi. Perumal in turn told her that she would be born as the daughter of sage Markandeya and she would be known as Tulsi. According to this one fine day when the sage was offering his daily prayers he saw a little girl in the form of Bhoomadevi playing beside the Tulsi plant. He adopted her and named her as Tulsi. Soon after that one day an old man who was actually Lord Vishnu came and told the sage that he wanted to marry his daughter. As expected the sage simple rejected the offer and replied that his daughter was too small in his comparison and could not even cook with proper dose of salt. The old man then said that he was ready to eat food without salt also but he would not leave without marrying Tulsi. This is when Sage Markandeya realized that it was the Lord himself and happily married his daughter to him. This is when Lord Vishnu appeared in his actual form. From this time only Lord Vishnu is worshipped with a garland of tulsi leaves as she stayed in his heart.

This is the actual reason for the name of this temple as ‘Uppil’ means without salt. This temple is also known as Oppiliappam Temple as ‘Oppi’ means the unbeatable. Till now the food served to the deity here is cooked without salt.

The temple has a five tiered gateway structure all made of Granite. The premises contain all the shrines and tanks attached to it. The Sahasradhari plate and pot are made of gold for special prayers. There are golden sword, diamond crown and gold arm for the image of Hanuman. The shrine over the main temple is also coated with gold. The main temple has the standing idol of lord Uppiliappam. The other halls are for the idols of Tulsi and sage Markandeya.  The holy birth spot of Bhoomidevi is also there in the Northern part of the temple premises.

There are two marble halls in the complex, one in which the festival deities are kept for rest and the other in which the Dolotsavam is celebrated. Along with these halls there are shrines of Rama, Lakshmana, Sita and Hanumana.

Outside the temple complex there are two marriage halls, two gardens with pretty flowers and two places for parking big and small chariots. The chariot festival is the main festival celebrated during the month of Panguni for nine days.

How to Reach Uppiliappam Temple