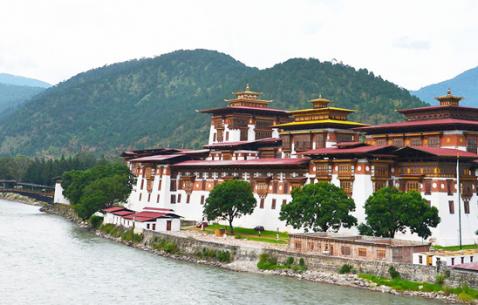 Thimpu, with a population of a little over 100,000 inhabitants including the Bhutanese Royal Family, is the largest and most cosmopolitan city in the country. Sprawling over the western slopes of the Wang Chu river valley, it affords residents and visitors immensely picturesque views from an altitude of 2,348m.

A centre for religion, commerce and government, it houses several important political buildings within its city limits like the Dechencholing Palace, the official residence of the King, and the National Assembly of the newly formed parliamentary democracy.

In terms of amenities, it is quite a modern city but it comes with some quirks. It is one of the few cities in Bhutan with ATM machines, so here’s your chance to stock up on some currency! It’s also the perfect place to give you a glimpse into contemporary Bhutanese culture as it is teeming with shopping malls, internet cafés and restaurants.

However, quite strangely, for a capital city, it does not have an airport within the city boundaries, instead using the airport in Paro, about 54km away. Another quirk of Thimphu is that there are no traffic signals here! That’s right, just the main intersections will have policemen standing in small pavilions that are intricately decorated, gesticulating exaggeratedly to keep the traffic flowing smoothly. This is quite a sight to foreigners unaccustomed to this unique sort of traffic control.

Thimphu’s journey of development only really began in 1961, though, after being declared the capital of the country by the third King Jigme Dorje Wangchuk, replacing the ancient capital of Punakha. The Thimphu valley has nursed several settlements over the centuries and a dzong has existed here right from 1216, but Thimphu being named capital turned a new chapter in the region’s life. Vehicles took to the roads in the next year and the small town slipped into the role of being the country’s capital quite seamlessly after that, with rapid expansion and mushrooming suburban development following quickly thereafter.Thimphu is now a city where apartment blocks, small family homes and family-owned stores mingle with government buildings, all establishments adorned with traditional Buddhist motifs and paintings.

The city has been undergoing massive development lately with tree-lined streets being laid down and a park-cum-open theatre being constructed in the heart of the city that used to be a clock tower area, to create a platform for live cultural performances.2008 saw the completion of the national stadium along with a new river-side park. The national stadium is also where the coronation of the King was held, coinciding with the centenary of the Wangchuk dynasty’s establishment.

Tourists are welcome here and there’s a lot to be explored and discovered, with the Bhutanese amalgamating modernity with indigenous culture very cleverly, fully conscious of the value of their ancient heritage. The culture of Bhutan is reflected very eloquently in many aspects of Thimphu, whether it be the architecture, the religious customs, the monastic practices or references in the media.One important festival celebrated in Thimphu is the four-dayTsechu festival, when mask dances, or Cham dances, are performed in the courtyards of the Tashichhoe Dzong in Thimphu. The Bhutanese just love to celebrate and bask in their rich culture!

A bustling farmers’ market takes place on weekends on the banks of the Wang Chu River that one must visit for fresh, organic produce as well as Buddhist religious paraphernalia like prayer flags and horns that is not to be missed.

Bhutan’s capital and headquarters of the government works towards the national objective of ‘GNH’ or Gross National Happiness in correspondence with the growth of Gross National Product (GNP).

The best tours and activities in the city, guided by experts to give you a local insight to the best of Thimphu