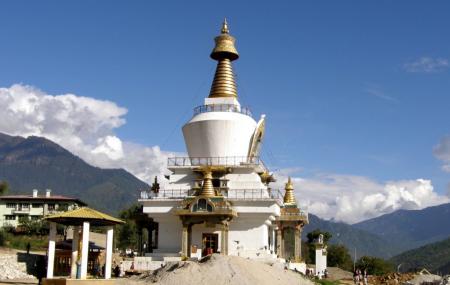 The Memorial Chorten, or the Thimphu Chorten, welcomes you at the entrance with traders selling souvenirs, carvings and incense. This Tibetan-style chorten is one of the most prominent religious landmarks in the city, resplendent in its golden spires, bells and prayer wheels. Located on Doeboom Lam in the southern-central part of Thimphu, it was constructed in 1974 to honour the 3rd King of Bhutan, Jigme Dorji Wangchuck by his mother Her Majesty the late Queen Ashi Phuntsho Choden Wangchuck as he wanted to build ‘a chorten to represent the mind of Buddha’. Consecrated by Dudjom Rinpoche, it went through extensive reconstruction in 2008.

A daily place of worship for many Bhutanese people, this is always bustling with activity and is a very pleasant family place, with people circumambulating the chorten throughout the day. Kids run underfoot, there to pay their respects before or after school as well. Early mornings will find the place inundated in prayer and peace as old-timers shuffle in, haul away at the massive prayer wheels beside the main entrance and pay homage at the small shrine inside the gate.

Richly painted annexes look out facing the cardinal directions and the intricate mandalas and statues adorning the whitewashed chorten makes for a very humbling experience. The golden finial atop the chorten beams wisely down at one and all.

The Memorial Chorten is a beautiful place to visit to get a glimpse into the rich spiritual beliefs and their methods of worship of the Bhutanese in addition to the great feat of architecture.

Love this? Explore the entire list of places to visit in Thimphu before you plan your trip.

Fancy a good night's sleep after a tiring day? Check out where to stay in Thimphu and book an accommodation of your choice.

People also prefer to start their day with Thimphu Chorten.