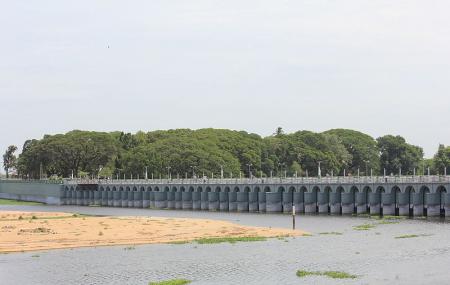 Built across the Kaveri (Cauvery) river, the Kallani Dam was first constructed in the 2nd century by King Karikal of the Chola Dynasty, making it the 4th oldest water-regulating structure in the country that is still in use.

King Karikal constructed the dam to avoid flooding in his kingdom by diverting the water from the Kaveri river to the delta district which needed an irrigation boost. However, due to an unequal distribution of water to the delta region, in the 19th century, the dam was reconstructed by the British who raised the dam walls by 27 inches to increase its capacity. Soon sluices were added to the structure to prevent silt formation and to form outlets that would feed the Kollidam River. Today, the dam covers a length of 1079 feet and irrigates a massive 1 million acres of land and has become not just an engineering marvel but also a serene recreational spot for tourist.

The adjoining park and banana fields add lush greenery to the area and is perfect for a walk while the Karikal Cholan memorial dedicated to the King, keeps his story and contribution alive even in modern Trichy. People visit the place to take a dip in the river when the water level is not high and to even spot colourful birds around. The view of the dam itself is surreal, especially on a sunny day when the blue skies are mirrored in the water. Don’t forget to try the delicious fresh fish served at the stalls that surround the dam.

How to Reach Kallanai Dam

Love this? Explore the entire list of places to visit in Tiruchirappalli before you plan your trip.

Fancy a good night's sleep after a tiring day? Check out where to stay in Tiruchirappalli and book an accommodation of your choice.

Are you associated with this business? Get in Touch
Thursday

People normally also visit Our Lady Of Lourdes Church while planning their trip to Kallanai Dam.