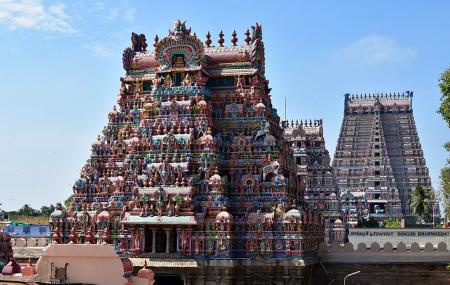 The Sri Ranganathaswamy Temple is one of India’s biggest temples and is one of the 108 Divya Desams (holy shrines) dedicated to Lord Vishnu. This particular temple has an idol of Vishnu in reclining form and is mentioned in Tamil literature and scriptures that date back to the time frame from 6th to 9th century. However, the oldest structure that can still be seen here dates back to the 10th century.

The architecture of the temple is strikingly different that others seen in India with distinct Dravidian style but it is the history of the temple that truly makes it special. During the 11th century, the temple was easily flooded since it was located on an island between the Kollidam and Cauvery rivers. In the 14th century, it was completely looted and destroyed by the Delhi Sultanate. However, the place was rebuilt later and extensions were made to its structure in the 16th and 17th century that added the intricately made Gopurams to its layout. Currently, the place has 49 separate shrines dedicated to Vishnu, 39 pavillions and 7 Gopurams- one of which is called the Rajgopuram and and is one of Asia’s tallest towers with a height of 73 metres. It is only after the seventh Gopuram that you can enter the main shrine with the reclining idol of Vishnu.

Other highlights of the temple include:

If you want to see the temple at its best, visit the place during the Margazhi month (December- January) when the place attracts around 1 million worshippers!

How to Reach Ranganathaswamy Temple

Love this? Explore the entire list of places to visit in Tiruchirappalli before you plan your trip.

Fancy a good night's sleep after a tiring day? Check out where to stay in Tiruchirappalli and book an accommodation of your choice.