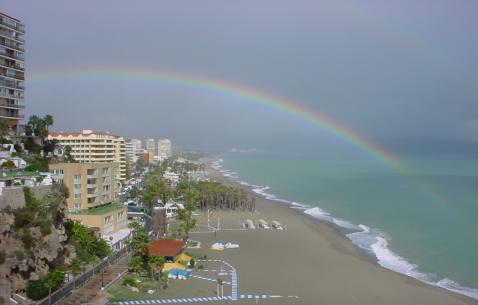 Torremolinos is a municipality located west of the city of Málaga on the Costa del Sol of the Mediterranean. It has around 70,000 residents and is the sixth largest city of the province of Málaga.

Torremolinos and its surrounding areas have shown proof of human settlement that go as far back as 10,000 BC. The actual town itself was founded by the Romans which back then had around 2000 inhabitants. During the War of Spanish Succession, the town was plundered, burnt and absolutely decimated. Its population was dwindled to a mere 106 people. The town was rebuilt during the 19th century and consequently became a poor fishing village. That was before the 1950s, when it was developed as a major tourist destination.

Its many beaches, beach restaurants and bars that serve as a perfect coastal haven for tourists who want to relax, unwind and sunbathe. The city is also well-known for its thriving nightlife, especially the bars and nightclubs that cater to the LGBT community and the population’s general indifference to sexual orientation—an appealing factor that brings in a large number of LGBT tourists to the city. Its beautiful waters also make for a great scuba diving and snorkeling experience – get the local travel guides to take you into the water. Head on over to this beautiful coastal paradise and holiday your blues away.

Essential travel information and Torremolinos tips for your visit

View all Hotels in Torremolinos