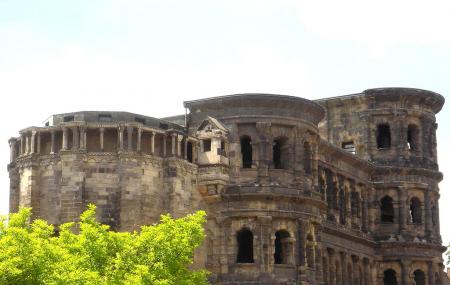 One of the most visited historical monuments in Trier, Porta Nigra stands impressive with its massive structure. It is a large city gate in Trier and is today the largest Roman city gate north of the Alps. The origin of its name in the Medieval Ages was due to its weathered dark colour of the stone. An unfinished project of its own time, the gate, nonetheless, was used for several centuries till the end of Roman era as an entrance to the town. Porta Nigra was designated as a World Heritage site in 1986. Its present appearance is the result of reconstruction done under the regime of Napoleon. The features of Porta Nigra are:

How to Reach Porta Nigra

Love this? Explore the entire list of places to visit in Trier before you plan your trip.

Fancy a good night's sleep after a tiring day? Check out where to stay in Trier and book an accommodation of your choice.

61.58% of people prefer walking in order to reach Porta Nigra

People normally club together House Of The Three Magi and Jews' Alley while planning their visit to Porta Nigra.