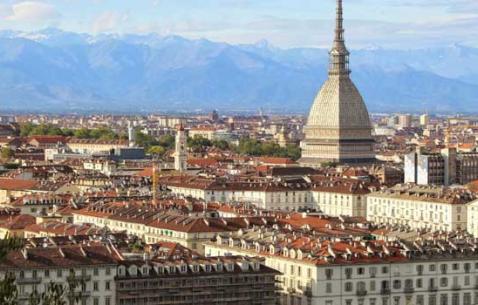 The capital of the Piedmont region in Northern Italy, Turin has inflections of several other cities in it, with the remains of Roman architecture, one of the biggest museums in the world dedicated to Egyptian art and relics and the National Automobile Museum paying homage to vintage Italian cars all nestled within the same boundaries. Versatile and inundated in its undulating history, the Torinese do not joke about cars or chocolate, the city having been the birthplace of Nutella, having been invented here in 1946 as ‘pasta gianduja’.

An important cultural and business hub today, Turin has traditionally been known as the country’s first modern capital since the Unification of Italy in 1861, the nucleus of the Risorgimento or the resurgence movement leading to the amalgamation of the several duchies, kingdoms and states into one. This was also the seat of the venerable House of Savoy, the Italian Royal Family that, with a quality very characteristic to the city, very graciously revoked monarchy after unification.

With its plethora of boutiques and art galleries, cafes and restaurants, leafy parks and tree-lined boulevards, Turin is the place to go to if it is culture and a treasure trove of fascinating history that you’re looking for. It is the European capital of Baroque architecture with several churches and cathedrals retaining the grandeur of a bygone era. The Holy Shroud of Turin, an exceedingly renowned and much-talked about relic, is housed in the Turin Cathedral and draws hordes of pilgrims on the rare occasion of its viewing. Turin tourist attractions are no pushovers.

Take a stroll around Piazza Castello and along the Via Roma to indulge you materialistic side – just the thought of these shops and boutiques have set many a shopaholic screaming in excitement all over the world. Parco del Valentino is one of the most important parks in the city that in its behemoth premises houses an 18th-century castle, botanic garden and medieval village. This is guaranteed to be unlike any other park you’ve ever seen, an no Turin tour is complete without it.

After a long day of sightseeing and shopping, you’re probably in need of some downtime and the nightlife in Turin is ready to meet you there. From crowded noisy pubs to quiet, elegant restaurants with delicious food topped off with excellent wines, the Quadrilatero Romano is a great option to head to, to round off your day with some good old-fashioned revelry.

Turin played host to the Winter Olympic Gamesin 2006. That was instrumental in the urban revival of the city and while it is not a mainstream tourist destination in Italy like Florence or Rome, it has developed its own unique identity for those who like striking out off the beaten path a little. It’s a pleasant city with the river Po flowing through it, as the Alps beam back at you in the Italian sun from the distance, the Mediterranean sea a mere handful of hours away. The things to do in Turin seem endless here in a city deemed by the renowned architect Le Corbusier as having “the most beautiful natural location in the world".

As any Turin travel guide recommend, you should definitely invest in the value-for-money Torino and Piemonde Card. Using the 72-hours option, you pay only 29 euros to gain free access to many museums and other attractions of the city. You can also see the restored Venaria Reale, the entry for which is covered by the pass(2 days 25 euros,5 days 34 euros,7 days 37 euros). Also included is a boat tour in the river Po and trip by chain train to Superga with a small fee to reach the top of the church and a guided visit to the tombs of the Savoy Royal family.

Plan Your Trip To Turin

The best tours and activities in the city, guided by experts to give you a local insight to the best of Turin