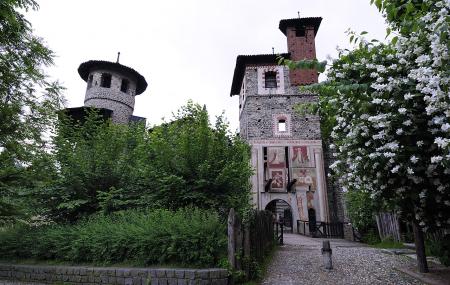 Let’s face it: sightseeing can become quite stressful in its own way after a point. When the abundance of Turin’s cultural wealth has left you feeling a little overwhelmed with historical information from museums and architectural landmarks – that’s when you should hit the Parco del Valentino, the most famous public garden in Turin, and the first one as well. As symbolic as the Mole Antonelliana for the city, it is bound to be a breath of fresh air and some leisurely exercise after all that indulgence in rich Italian food and desserts between tours.

Very close to the heart of the city, it is located along the left bank of the majestic river Po, between the monumental bridges and Isabella. A great place to unwind, you’ll come across Italian families spending some time out in the sun during those tranquil strolls.

The heritage of the park is so remarkable that you can’t help but feel as though you’re a part of a time-travelling experiment. Take your time with those strolls – there’s the Botanical Gardens, one of the main study centres of Italian botany, and the Castle, the park’s most famous structure, constructed in the early 16th century and then refurbished. It still retains the splendour of 17th architecture and is the seat of Turin Polytechnic's Faculty of Architecture. The Medieval Village is a must-visit here, its magnificent complex paying homage to a 15th century village with fortified houses, a drawbridge and the multiple, looming towers of the castle.

The Medieval Village was initially built for the 1884 Turin International Exhibition, based on the quirky designs of Alfredo d'Andrade, a connoisseur of the Piedmontese Middle Ages who had restored several castles and abbeys in Piedmont.

Check out the Società Promotrice delle Belle Arti if you’re into art. Founded in 1842, the Society lies to the right of the Castello del Valentino and is used for temporary art exhibitions.

The Villa Glicini hosts many international foil, sabre and sword fencing competitions annually, being the headquarters of the Turin Fencing Club.

The Torino Esposizioni and Underground Pavilion Complex is a famous venue for prestigious events that was the seat for the International Motor and Industrial Vehicles Shows until 1990 (when they were transferred to the Lingotto Exhibition grounds). The complex also houses the Teatro Nuovo and the Ice Palace.

How to Reach Borgo Medievale

People normally club together Piazza San Carlo and The National Automobile Museum while planning their visit to Borgo Medievale.