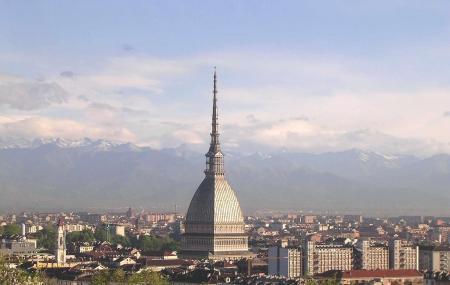 The Mole Antonelliana is a brainchild and a labour of love rolled into one, the architectural symbol of Turin named after its creator Alessandro Antonelli. A daring feat in design at the time of its construction, beginning in 1863 soon after the Italian reunification, the Mole has quite a romantic history in its wake.

Initially constructed to be a synagogue, the Mole witnessed several hiccups in the backdrop of Antonelliana’s unhappy relationship with the Jewish community. An exchange was proposed by way of the construction of a Moorish Revival synagogue on a piece of land and thus the ownership of the Mole was passed over to the city of Turin. Its construction saw fruition in 1938 but the drama continued and at the hands of a violent cloudburst and tornado in 1953, the uppermost pinnacle was completely destroyed. It was rebuilt in 1961, with a special feature called the panoramic lift to celebrate the centennial of the unification of Italy.

Since 2000, the Mole has been home to the National Museum of Cinema capturing the journey of film through the ages, leaving film fans in awe. Even if you’re running a little short on time to comb the museum, don’t miss the highlight: the panoramic lift with glass walls that takes you up the levels of the highest museum in the world. Right through the centre without any stops you go, to be regaled with over 300,000 movie posters and inconceivable film paraphernalia from bygone eras. One moment you’ll just be your regular old self probably clicking a couple of pictures and the next moment, you will find yourself at the apex of the dome, feeling like goddamn Charlie from Dahl’s Charlie and the Great Glass Elevator, as the city and the Alps sprawl around you in the distance.

The ground floor or Temple Hall is also a great place to unwind and watch a couple of old movie trailers while admiring the genre-wise scattering of movie sets. Have no doubt, this one is quite the charmer and a feat of storytelling (of cinema) in itself.

Try and get there half an hour before the panoramic lift begins for the day (around 10AM) to beat the crowd and make the trip up without getting too jostled.

Be sure to get a bundle ticket, to get access to both the panoramic lift as well as the museum – plus, you get a discount!

Evenings in the middle of the week are a great time to visit the museum.

For single visitors and groups with fewer than 15 people, you can buy advance tickets for:

79.49% of people prefer walking in order to reach Mole Antonelliana

People normally club together Piazza Vittorio Veneto and Museum Of National Cinema while planning their visit to Mole Antonelliana.