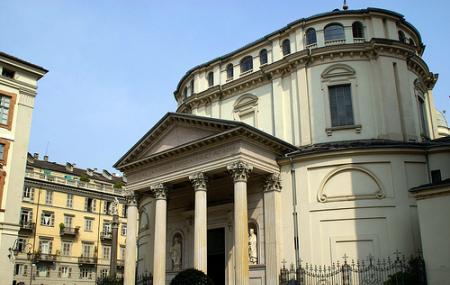 The Santuario della Consolata or Sanctuary of the Virgin of the Consolation, a prominent Marian sanctuary in Turin, can come across as quite a mouthful and is affectionately referred to as La Conslo in the region.

Entering from the sunny square into the Sanctuary might leave you feeling a little disoriented for a bit, but as your eyes adjust you won’t be able to help but revel in the rich colours and texture offered up by this monument, with arch after arch of ornate side-chapelsand beautiful lighting.

Like most historical architecture in the area, this Sanctuary too spells rich, luxurious Baroque. The first church was built here as early as the 11th century, dedicated to St Andrew. Over the course of nine centuries, it was restored around the 18th century and also underwent a facelift by way of the addition of polychrome marble and stucco decorations.

In addition, the church also showcases a myriad other votive offerings; hundreds of military epaulettes, war crosses from the two World Wars, ornaments and a seemingly unending pattern of cupola frescoes.The altar itself is magnificent, with two marble angels in adoration and the Gallery of Paintings bears pious witness to the grace of la Madonna della Consolata.

Also check out the Crypt of the Grazie if you have some time, along with the the gorgeous chapel dedicated to the two Queens - Maria Teresa and Maria Adelaide.This is the sort of place that is massive and intimate at the same time, that doesn’t leave you feeling overwhelmed with information or its intricate details. Instead, it will grant you feelings of warmth and wonderment – the sanctuary just celebrated its millennial anniversary this year! Pop over to the ‘El Bicerin’ across the road after the visit to enjoy a cup of Italian coffee with liqueur and chocolate and cream, to bask in the goodness and the gravity.

83.87% of people prefer to travel by car while visiting Santuario Basilica La Consolata