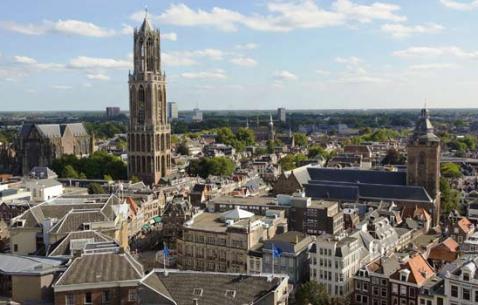 Utrecht (/ˈjuːtrɛkt/; Dutch pronunciation: [ˈytrɛxt] ) is the capital and most populous city in the Dutch province of Utrecht. It is located in the eastern corner of the Randstad conurbation and is the fourth largest city in the Netherlands with a population of 330,772 in 2014. Utrecht's ancient city centre features many buildings and structures several dating as far back as the High Middle Ages. It has been the religious centre of the Netherlands since the 8th century. It lost the status of prince-bishopric but remains the main religious center in the country.Utrecht was the most important city in the Netherlands until the Dutch Golden Age, when it was surpassed by Amsterdam as the country's cultural centre and most populous city. Utrecht is host to Utrecht University, the largest university in the Netherlands, as well as several other institutions of higher education. Due to its central position within the country, it is an important transport hub for both rail and road transport. It has the second highest number of cultural events in the Netherlands, after Amsterdam.In 2012, Lonely Planet included Utrecht in the top 10 of the world’s unsung places.

One of the large cities of Netherlands, with a population of around 350,000, Utrecht has a long history. In AD 47, the area formed a part of the defensive line of the Roman Emperor Claudius. It gradually developed and came to be called Utrecht.Today it is popular for tourists and students.

Plan Your Trip To Utrecht

The best tours and activities in the city, guided by experts to give you a local insight to the best of Utrecht